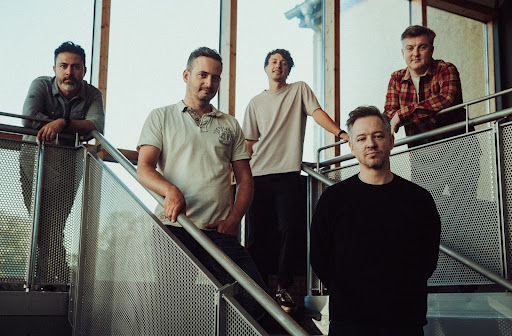 Back with their second single to date, THE SLEEPING SOULS, have unveiled the agitated and electrifying new cut: “Caught Up In The Scrape”.

Sharp as a butcher’s blade, dripping with the anger of a betrayed generation, “Caught Up In The Scrape” is a rousing punk-rock anthem for our times.

A testament to The Sleeping Souls‘ stellar breadth and versatility as musicians, it marks a discernible change of tack from the slow-burning, heartfelt folk of their debut single “Liar/Lover” (released late last year). With its fuzzy, reverb-laden riffs, highly-charged instrumentals and rapid-fire vocals, the new single flaunts the band’s heavier side and ability to switch things up a gear with exhilarating effect.

Offering astute and direct observations on our  culture-war world in which political leaders fail again and again to measure up, The Sleeping Souls explain of the themes at play in “Caught Up In The Scrape”:

“”Caught Up In The Scrape” is a song about utter disillusionment with politics and political leaders. Modern liberal societies are complex webs of trust relations, but trust has bled out through sustained failure of our politics to be fit for purpose. Cahir grew up and has spent most of his life in Northern Ireland where these failures have been, and continue to be, particularly acute. Until our political class are transparent about their shortcomings, acknowledge mistakes and, in the most egregious cases, accept consequences, political agitation will continue to heat until one day — perhaps not too long from now — it will boil.”

Both “Caught In The Scrape” and “Liar/Lover” are the first fruits in a planned string of releases due to emerge from the band throughout 2023, with a debut LP also in the pipeline for later this year.

The Sleeping Souls have toured with punk-icon Frank Turner since 2006. They have recorded six studio albums with the artist, including 2022 #1 ‘FTHC’, headlined Wembley Arena, performed at the 2012 London Olympics and toured the world many times over.

New single, “Caught Up In The Scrape” arrives as the band gear up to return to the road as Frank’s band this month, with a full UK tour kicking off in Falmouth on 20 January 2023. Full dates here.

Previous article
DRIVING 73
Next article
FUSS OVER NOTHING