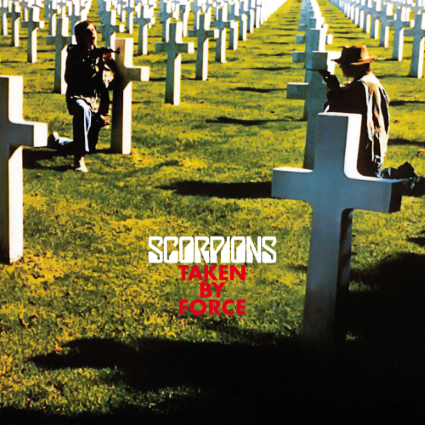 In the run up to their re-release next week, we will be bring you the lowdown on each of these Scorps classics. Starting today with Taken By Force

TAKEN BY FORCE, the last studio album with Uli Roth, was also the first with new drummer Herman Rarebell. He also made his presence as a gifted lyricist. His first contribution to the rapidly growing Scorpions song portfolio were the words to ‘He’s A Woman – She’s A Man’.

The album includes many songs which since have since become hard rock-classics. ‘Steamrock Fever’, for instance, a straight forward rock song, had been a live hit for many years. Then we have ‘I’ve Got To Be Free’, written by Uli Roth, an energetic and hard rocking piece with great riffs and more breath taking guitar work that demonstrates Roth’s superb mastery of the six strings. The already mentioned ‘He’s A Woman – She’s A Man’ stands out for its ultra heavy riffs as well as for its catchy refrain. Then there is the dark and mystic ‘The Sails Of Charon’, another piece created by Uli Jon Roth. The most unusual song on this album, and perhaps the most underrated, too, is ‘Your Light’. A funky bass introduces the track and it grooves in an almost  Motown-like fashion, offering the perfect antidote to ‘The Sails Of Charon’ and ‘Riot Of Your Time’. Finally, the ballad: ‘Born To Touch Your Feelings’ is easily on par with monster ballads such as ‘Still Loving You’ or ‘Holiday’ which soon should establish the Scorpions as the true masters of ballads.

Despite the growing musical alienation between Uli Jon Roth and the Scorpions, TAKEN BY FORCE turned out to be a fascinating album which has not a single weakness. It is the superb culmination of the Uli Roth- years and an album that has massively influenced heavy metal and its various sub-genres for years to come.

To celebrate their 50th band anniversary, the Scorpions are releasing a  Deluxe Edition of TAKEN BY FORCE. The high quality Digipack includes the newly remastered original album tracks and some very rare bonus tracks such as the exciting and never before released “Blue Dream (Unfinished Instrumental)”.

An extensive booklet rounds the package off. It features liner notes written by Edgar Klüsener, a former editor of Germany’s Metal Hammer, as well as rare photos.