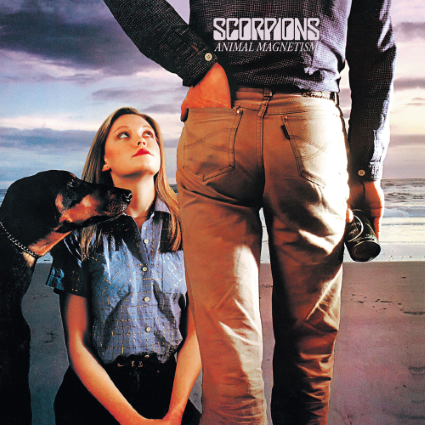 Another album, another classic, another risque cover….

Although the band was under enormous pressure to write and record ANIMAL MAGNETISM in the shortest possible time, they created a masterpiece that stands out even three decades later. In many ways they have anticipated if not invented musical styles which would in later years become heavy metal genres in their own right. The slow, powerful and hypnotic groove of the title track, for example, has all the important ingredients of what would years later be known as doom and groove metal. The Scorpions, although hard pressed to deliver a worthy follow up to their biggest commercial success yet, did not succumb to the temptation to simply record another version of  ‘Lovedrive’. ANIMAL MAGNETISM is far from that. The album is all about high energy, intensity, aggression, superb guitar riffs, and the freedom taken to explore different musical  directions. The equally brilliant pieces “Another Piece of Meat” and “Twentieth Century Man” are further cases in point. This is also the first album on which Matthias Jabs left a real mark. He co-wrote ‘Don’t make no Promises (Your Body can’t keep)’ with Hermann Rarebell and his inspired and technically excellent guitar playing added spice and flavour to the songs.

ANIMAL MAGNETISM was to become yet another milestone-release for the Scorpions, the first one to reach platinum status in the USA and so establishing the band firmly among the greats of rock music. Music from ANIMAL MAGNETISM would soon be used in rather unusual  environments, too: Generations of American strippers have derobed to the ‘The Zoo’.

To celebrate their 50th band anniversary, the Scorpions are releasing a CD Deluxe Edition of ANIMAL MAGNETISM. The high quality Digipack includes the newly remastered original album tracks and the additional songs “Hey You” and the hitherto unreleased outtake “American Girls”.

An extensive 16 page booklet rounds the package off. It features liner notes written by Edgar Klüsener, a former editor of Germany’s Metal Hammer, as well as rare photos and single covers, images of backstage passes and tour posters.