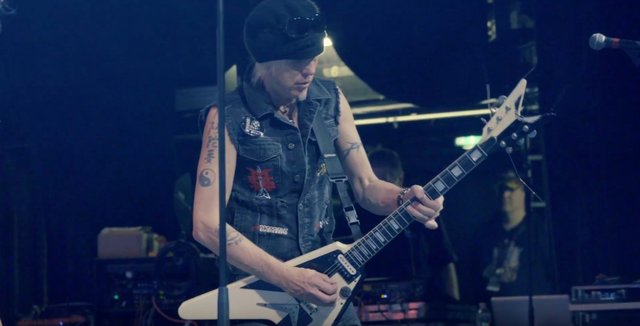 Michael Schenker is one of the most significant rock guitarists in the history of music.

He has mesmerised the rock community since the 70s with his characteristic guitar playing style and solidified his place in music history writing hits like ‘Doctor Doctor’ and ‘Rock Bottom’ during his time in UFO, as well as composing SCORPIONS classics such as ‘Lovedrive’, ‘Coast To Coast’ and ‘Holiday’, among others. His playing has proved influential for several generations of guitar players.

Back in 1979, the ‘German Wunderkind’ decided that he wanted to be his own boss. He founded the MICHAEL SCHENKER GROUP aka M.S.G. and released masterpieces such as Assault Attack and Built To Destroy, the live legacy One Night At Budokan as well as the McAULEY SCHENKER GROUP pearls Perfect Timing andSave Yourself. M.S.G. also became a home for some great vocalists, including Gary Barden, Graham Bonnet (ex-RAINBOW etc.) and Robin McAuley.

Today, the band releases the first single from the new album. Watch the official video for ‘Warrior’, here

You can also pre-order the single on 12″ Limited Edition Black, Orange or Clear Vinyl:  http://nblast.de/MSFshop

‘Warrior’ is one of two album tracks on which all of the four lead singers appear. The music was composed by Michael Schenker and the lyrics were written by Michael Voss-Schoen.

“When Michael Voss-Schoen showed me his lyrical and vocals ideas, it instantly came to my mind that all four singers should be involved”, Michael reminisces. “I’m really fascinated by the result. It’s really interesting how the different voices complement each other. ‘Warrior’ is really heavy but at the same time ear-friendly and catchy!”

“Michael Schenker played the basic riff of the track to me and I immediately had the expression ‘Warrior’ pop into my mind. On the next day, the first raw version of the song was created; my vision was to let the four voices sound like the four musketeers!” comments Michael Voss-Schoen.