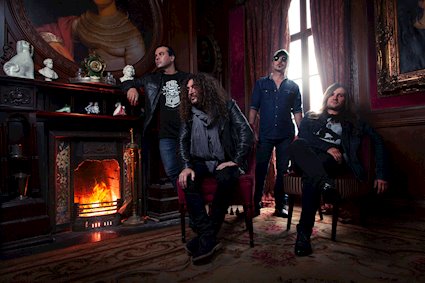 Containing a heavy uncompromising monster riff and very hard blues in its lyrical content; ‘Thru That Door’ is the third single to be taken from Samarkind’s impressive debut album and was produced by Alwyn John Walker, David Paul Byrne and Michal Kulbaka, with mastering by Jon Moorehead. The new music video was filmed in a unique building in Dublin’s inner city by Ian James White.

With Samarkind’s debut having received high praise from the fans and press /media, vocalist David Paul Byrne reflects on the success and his thoughts on the digital era vs his time in 80’s rock group Assassin, “I was stunned by the positive reaction Samarkind’s debut album received, we had to pinch ourselves.. it just goes to show the power of the fans and what social media can do. Although there are some downsides attached to it, social media for Samarkind has been wonderful. It’s such a thrill when your cds and merchandise are selling all over the world; simply put it would never have happened back in the day and we have got digital platforms to thank for that”, says Byrne.

“As good as things are right now, things certainly aren’t as wild as when I started out as a green 16-year-old”, confesses the vocalist. “I remember playing a show in Dublin with WASP with myself watching side stage. It got to that part of the show when they decided to spark up Blackie’s famous rocket powered codpiece and the next thing you know there was a mighty bang KABOOM, and everything went everywhere… literally! It was a sight to behold. Nowadays it’s a bit more serious and health conscious for sure, but the music and the laughs I have with the guys in the group more than makes up for it!”

So it’s not just the luck of the Irish that’s caused such a positive outcome for the multi-national Dublin based rock band. Samarkind’s self-titled debut album oozes confidence and tracks that wear classic influences on their sleeves but always looking forward to what’s up ahead. “As creative artists know, when you surround yourself with positive inspiring musicians and passionate music fans, it’s impossible not to be motivated into wanting to write new material.”

Does that mean we can expect a second album?

“Oh yeah, for sure”, confirms Byrne, “we’re currently writing new songs and in pre-production…just try and stop us.”