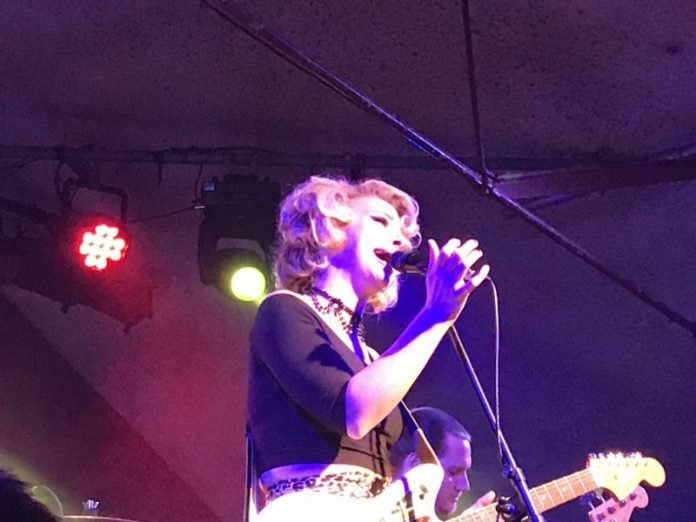 The Belle Of The West gets funky

It’s a filthy night in the Black Country. Wet, windy, and generally autumnal. Those words are not ones that enter the vocabulary of Shrewsbury’s Rainbreakers. Happy to bring the sunshine wherever they go, they have a funky, summer breeze about their blues. Indeed, since we last saw them at the end of May, a couple of things have happened. They’ve toured in Spain – guitarist Charlie had an “interesting” time with food apparently – and they’ve come here armed with a heap of cracking new songs. “Lost With You” even for them, is soul filled, “She Got Me Where She Wants” is as bluesy as you like and “Heavy Soul” is sort of a halfway house between the two –  the new material seems set to continue their rise. They end with a pair that show their prodigious talent. A simply stunning cover of Gary Clark Jr’s “Ready When My Train Pulls In” is a chance to jam, while “Ain’t Nothing Going On” is rip-roaring fun as ever. Here, we beg to differ. When it comes to The Rainbreakers there is plenty occurring. They are one of the best new blues bands around.

Samantha Fish has been coming to The Robin for six years, but this is the first chance she’s had to bring her band with her. That means it’s the first time she’s been able to flesh out both sides to her music.

2017 has been a productive year for the Kansas born guitarist and singer. She’s released two albums- the Motown infused “Chills And Fever” and the fabulous country flavoured blues of “Belle Of The West”. That rather provides the clue to tonight because that is rather the two worlds Fish inhabits.

Effectively a couple of gigs in one with the horn drenched classic stompers like “Hello Stranger” and the title track of “…Fever” which struts itself around. The band has a keyboard player and a two-piece horn section and they are as integral to the sound as Fish’s fine guitar work and the fine rhythm pair.  Her skills come perhaps more to the fore on the “…West” songs – and happily there are plenty, given that it is a superb record. “Blood In The Water” takes on extra life here with the added sonics.

There are a couple of outright bluesy affairs from her 2015 album “Wild Heart” (“an old ass record from all of two years ago” Fish jokes) and both “Show Me” and “Lost Myself” are highlights. What they also signify, though is just how much the smiling, charming star of the show has come since.

The breadth in her material now is perhaps shown best by the widescreen jam “Somebody’s Always Trying”, which is followed by the solo rendition of the confessional “Need You More” which benefits hugely from that treatment.

Charley Patton’s “Jim Lee Blues” is one of two “old school” (her words) blues songs that are played – although that one is given a trumpet solo –  “Is Your Voodoo Working” is a chance for the band to shine individually, “Nearer To You” shows her excellent voice, while the slide playing “Jane Crow” is exceptional.

Oddly, there is no encore, although it seemed set up for one – but perhaps Fish is working on the premise of always leave them wanting more? Either way, it seems that after six years of coming here, she is finally ready to be herself.