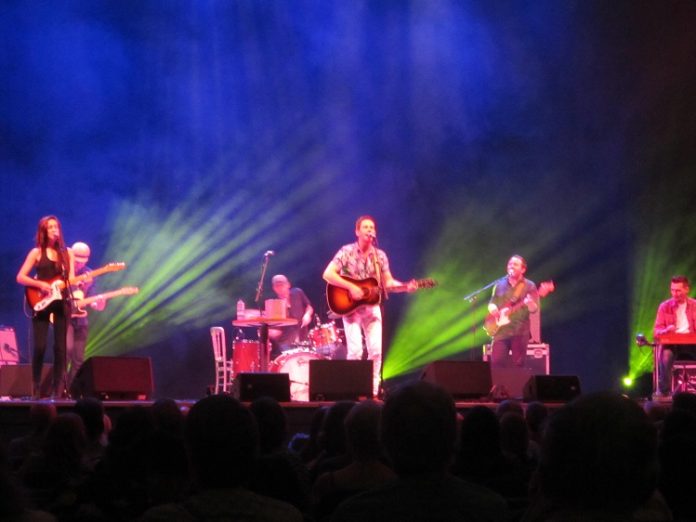 Molly Parden’s t-shirt in the foyer might, shall we say, borrow a logo from Iron Maiden, but the Nashville native (“they used to make country there” as Sam Outlaw puts it later in his set) does a neat line in singer-songwriter angst for one so young.  Her own tunes, like “Kentucky” are fragile as only a solo artist can be. She gives her age away when she points out that Mark Knopfler has been her favourite guitarist “since I heard him six years ago….” But no matter she does his “Why Worry” real justice. Ending on a sad note with “I Know You Can” she gives a real hint at her talent.

Demi Marriner isn’t from as far afield, but the young English singer is no less talented. Performing with a band – the aching Lap Steel accompaniment gives a real sense of longing – her songs have a folk quality to go with the Americana feel. “Mother”, is you’d imagine, written from the heart, and “What Am I Doing Here” takes on extra significance perhaps, given that this is obviously an evening she is savouring. “Cold Coffee” is a highlight musically, and the likes of “Snakes And Ladders” suggests that there is a lot more to come.

Sam Outlaw is, tonight, without his trademark Stetson. He’s ever hatless, but the thing is stuck in Spain. No matter, as he has a stunning pair of white jeans on – not to mention a shedload of great songs in his back pocket.

To go with this he has a great band, and whilst the seated crowd tonight perhaps doesn’t help them get what you’d imagine is the riotous party they prefer, then at least the warmth of the songs comes through.

“Love Her For A While” is welcoming and as laid back as the summer warmth, but “What Doesn’t Kill Me” belies this in amongst some acerbic observations regarding the platitudes of people. “Bottomless Mimosas” is glorious, while “Who Do You Think You Are” takes the sounds of Mexico and puts them on show.

Molly Parden is playing in the band all night and covers the old-style country “Someday Soon” before duetting with Outlaw in a wonderful acoustic section, “Country Love Song”, the plaintive “Ghost Town” and the vivid imagery of “Bougainvillea” all benefit from being stripped down.

It is a measure, however, of his wonderful songwriting that the closing section is loud rock n roll and it switches gear effortlessly. “Keep It Interesting” and “Trouble” – with its elements of Springsteen – are superb and “Hole Down In My Heart” ends things in rambunctious fashion.

The encore, possibly, has the two most country song titles ever. “She’s Playing Hard To Get (Rid Of)” is arguably topped in all senses by “Jesus Take The Wheel (And Drive Me To The Bar)” but then, really what do you expect from a man who’s name really is Outlaw – well it’s his mother’s maiden name to be exact. He could only go one way. And he does it expertly.  They’re already tipping him as the next big thing, and maybe this Outlaw is going to have to go straight – and he’ll be able to afford a new hat.