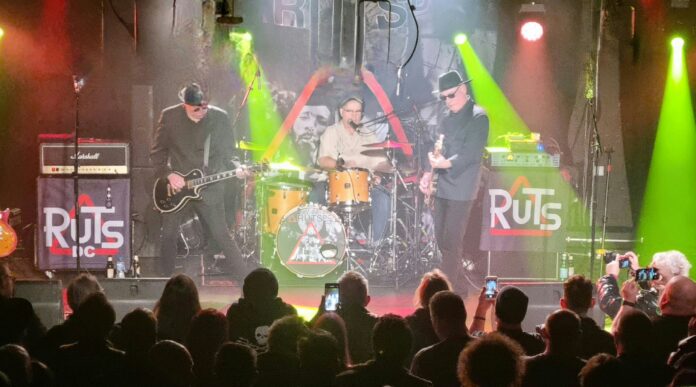 After he’s played “No Time To Be 21” T.V Smith stops and says. “When I wrote that song, you know, we had rising unemployment, inflation was through the roof, there was a cold war and strikes all over the place……when will it get better?!” That, right there, is essentially the DNA of this set. The social conscience, this machine kills fascists, as it used to say on Woodie Guthrie’s acoustic.

Smith is on his third trip to the second city in 2022, his second in the space of a month, but unlike his jaunt with The Bored Teenagers opening for The Damned in November, this is T.V and his incendiary one man show. Stick thin and dressed as if its 1977, he attacks it with the vigour of punk too and its brilliantly paced. That means “Bounce Back” might start with hope, but that has faded by the time we get to “Expensive Being Poor” and the brilliant “The Immortal Rich”. There’s a new song too “Handwriting”, imagining a world where “everything you love has been banned” it hasn’t been recorded yet. It needs to be, sharpish.

Of course, he needs (for all kinds of reasons) to play some of The Adverts, and “Gary Gilmore’s Eyes” – controversial in its day – works well stripped down, but there’s a superb move into the band he was in after, The Explorers, for “Tomahawk Cruise”. The last two, neatly sum up the set. “The Lion And The Lamb”, one of his own, before “One Chord Wonders” gets them pogoing at the front.

This is a set that not only proves that TV Smith is a mighty songwriter, but it underlines the idea that you don’t have to be loud to be a punk.

It’s 2022. The last few years have been relentlessly bleak. There’s no reason to feel that after what Counting Crows might term “A Long December” that (if we may paraphrase one of their songs) next year will be any better than the last few.

Enter Ruts D.C and the simple question: “brothers and sisters, has it come to this?”

That is a key line on not only their new album “Counterculture”, but the thread running through their 90 minutes tonight.

They are proud of that new record (well might they be, its wonderful) and they play a lot of it here, but they are interspersed with plenty of classics to keep the old time fans happy too, not least “S.U.S” and “You’re Just A…..” which are played early, but their power is in the menace, the brooding anger rather than the visceral explosion you might associate with their peers.

That suits the new material perfectly. “X-Ray Joy” canters along with a bleakness, and if early single “West One (Shine On Me)” still has the fury of the early 80s, then that’s because the fire burns in the men playing it too, as the two that follow, the new album’s title track and its reggae infused, “Born Innocent” make clear. Immediately following that with “Jah War” (“we’ll lighten the mood with a song about rioting” smiles John “Segs” Jennings, the singer since they reformed around a decade back.), and the magnificent lead song from “Music Must Destroy” is almost like re-iterating it: whatever incarnation of the band, whatever era, they have some erudite songs to play. Special mention at this point for Leigh Heggarty, the only non-original in the trio. His guitar is a highlight throughout.

“In A Rut” turns into a medley for all the people we’ve lost recently, so there’s snippets of Hawkwind, PiL and Wilko Johnson, its beautifully done and an example of how well thought out all this is.

That extends to the end, so after “Babylon’s Burning” they disappear, but when they return it’s with arguably the best moment on “Counterculture”, “Pretty Lunatics”, which moves neatly into “Staring At The Rude Boys” and then “Psychic Attack”. The fact that they end with a song from their newer period, reiterates everything you need to know about Jennings and Dave Ruffy (the drummer for 45 years): That is, they could just trot round the stages of the UK playing the hits and pretending it’s 1979, but they know there’s no fun or merit in that, that 2022 has things that they need to address, they did all that and more here, and all credit to them for being so bold in a world where most are timid. “Where is the counterculture, just a question”, “Segs” had asked before they’d played it. Might we suggest that it is still right here?

Previous article
BAND OF THE DAY: SHEPHERDS REIGN
Next article
ARTIST OF THE DAY: MIKE CAMPESE