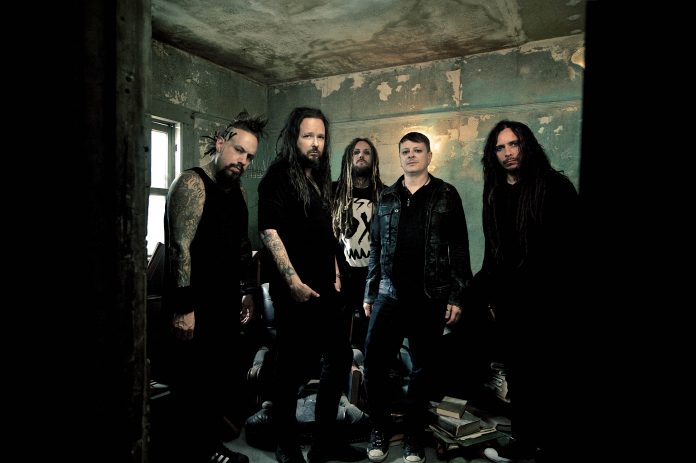 New one from resurgent metallers

Hot on the heels of their festival-stealing set at this year’s Download, KORN have announced that their 12th studio album, ‘The Serenity Of Suffering’ will be released on 21st October.  The collection marks the band’s welcome return to Roadrunner Records, who previously released 2010’s ‘KORN III – Remember Who You Are’ and 2011’s ‘The Path of Totality’.  You can pre-order the album from today at http://flyt.it/KORNSOS and grab the first single, ‘Rotting In Vain’ right away.

The video for ‘Rotting In Vain’ stars ‘Sons of Anarchy’ actor Tommy Flanagan.  Check out the clip, lensed by famed rock photographer & video director, Dean Karr, here.
The band’s frontman, Jonathan Davis tells us, “‘Rotting in Vain’ was written about being in that black place, being in situations that I don’t like in life, be it relationships or feeling when you’re stuck and you’re just being abused or you don’t like where you’re at, and you just sit there and rot.  It takes you years and years to figure out how to claw your way out. That’s where ‘Rotting in Vain’ came from. That’s the vibe that inspired the song.”
Produced by Nick Raskulinecz (Foo Fighters, Deftones, Mastodon), the album also features a special guest appearance from Corey Taylor of Slipknot.  The sleeve artwork (attached) is by artist, Ron English.
Earlier this week, KORN kicked off their ‘Return of the Dreads Tour’ in Denver, CO.  This co-headlining summer trek with Rob Zombie, features special guests, In This Moment and continues through 3rd September.  On 24th September, KORN will then share co-headlining duties with Breaking Benjamin on the ‘Nocturnal Underground’ arena tour, featuring special guests, Motionless In White.
www.korn.com,www.facebook.com/korn, www.twitter.com/korn, or www.instagram.com/korn_official.