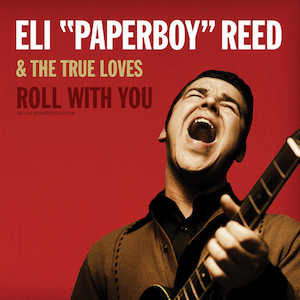 In 2008, Boston-born, Brooklyn-based soul singer Eli Paperboy Reed released his debut album, Roll With You, to critical acclaim. To mark its 10th anniversary, Yep Roc Records will release a deluxe remastered edition November 23. Available on CD, and for the first time on LP, the deluxe edition features the 11 original tracks, 12 previously unreleased tracks, and exclusive content.

With “a voice that brings together the yelp of Georgie Fame, the honey of Sam Cooke and the crackle of Curtis Mayfield,” (The Guardian), Roll With You showcases Reed’s unmistakable soul-infused style and features a gospel-tinged mix of sweaty, up-tempo numbers and aching, lovelorn ballads.

From humble musical beginnings growing up outside of Boston, Reed moved to Clarksdale, Mississippi when he was 18, and cut his teeth playing and singing in juke joints all over the Delta. From there he took the well-trod path to Chicago, where he spent a year as minister of music with Southside church of Soul legend Mitty Collier. Soon after returning to Boston in 2008, he released his first full-length studio album, Roll With You. Come and Get It (2010) and Nights Like This (2014) followed, with Reed and his band impressing audiences on five continents. In 2016, he returned to the studio for his Yep Roc debut, My Way Home.