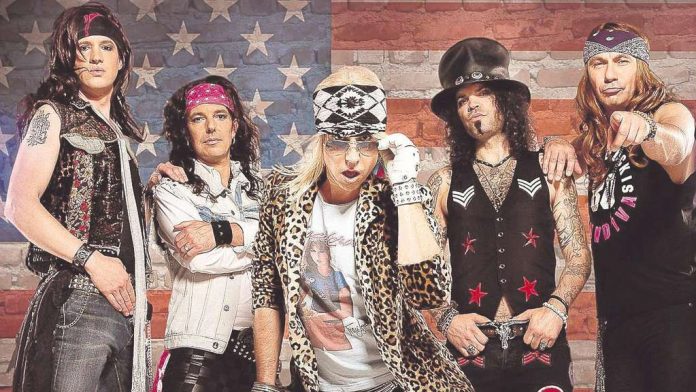 Taken from their debut album, ‘Mama Said Rock Is Dead’, due to be unleashed on February 8th 2019, ‘Lolita’, is a glorious taster of the twelve classy compositions contained on this consummate debut album. Packed with anthemic choruses, smooth riffs and supersonic guitar solos, ‘Mama Said Rock Is Dead’ is a magnificent melodic metal triumph which more than belies the album’s tongue-in-cheek title.

The rightful heirs of an era in which Van Halen, Aerosmith, Bon Jovi, Whitesnake, Scorpions, Guns N` Roses and Mötley Crüe rocked the world and rampaged the planet; John Diva is charged US entertainment at its very best.

But who are John Diva & The Rockets Of Love? First and foremost, there’s their vocalist John Diva, who, with a knowing twinkle in his eyes, sings about the great adventure that is being a celebrated rock star. No surprises there, with his life story; “I was raised by a mother who worked hard and rocked harder”, Diva reminisces. “She was a fan, a groupie, always hanging out at the clubs. My childhood was one big after-show party.” As a songwriter for the stars, Diva later on helped create the sound that would soon afterwards be known as stadium rock.

The blonde Adonis describes ‘Mama Said Rock Is Dead’ as follows: “It’s a trip for those who have lived and loved Rock’N’Roll, for all those who still do so and for all the millions of people who up to now didn’t even know what they’ve been missing. We’re having a party as big as the eighties and you’re invited to let your imagination take flight by my wild and wonderful life.”

At John Diva’s side are the guitarists Snake Rocket and J.J. Love, bassist Remmie Martin and drummer Lee Stingray jr. (drums) who, in previous years, have pulled off their spectacular performances in front of thousands of fans; three times at the Wacken Open Air Festival already. Once you have witnessed this band on stage, you know how exciting and stimulating strenuous Rock’N’Roll can be.

All twelve songs were produced by Michael Voss (Mad Max, Michael Schenker, Tony Carey et al) in the ‘Gizmo 7 Studios’ in Malaga, Spain, the ‘Principal Studios’ and the ‘Kidroom Studio’ in Münster, with Chris von Rohr (Krokus, Gotthard) as creative supervisor. A dream team of international renown with the experience of real Rock’N’Rollers.

‘Mama Said Rock Is Dead’, which will be released as a digipak CD (with double sided fold-out poster), double gatefold 180 gram green with black swirls vinyl LP (+ CD in paper sleeve & 4 page poster booklet), download and stream, is an album where the crazy times of early years meet the drive and energy of oncoming further crazy nights. This album is nothing less than a credo, a prayer and a homage to all those who have paved the way for John Diva & The Rockets Of Love. It’s a farewell to all the greats of the genre and beyond – to Lemmy, Bon Scott as well as to David Bowie, Janis Joplin or Jimi Hendrix – and a proud statement: Thank you my idol, I’ll take it from here!