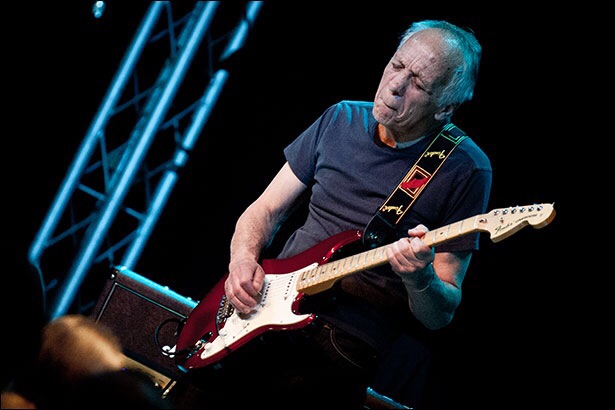 Two generations of blues come together in one very special night

It’s a case of déjà vu all over again. With a cheery “Good evening Birmingham, how are you all doing? It’s good to be home,” Joanne Shaw Taylor strides out onto the wonderful Town Hall stage. Just as she had – with those exact words – a few months before, when the woman born just down the road, headlined this very venue.

It’s a measure of Taylor’s lack of ego that she’s prepared to step down to support duties here, and it’s a measure of her quality as a performer that she does it quite so well. She’s off and running with “Mud, Honey” the marvellous lead track on her marvellous “The Dirty Truth” record, but it is “Watch ‘Em Burn” that really catches the eye, it’s aggressive blues groove topped off with JST’s gravelly voice and stunning guitar playing.

The cover of Frankie Miller’s “Jealousy” drips with raw emotion and the guitar does almost seem to gently weep at one point on its glorious journey. “Jump That Train” is funkier, “Tried, Teated And True” is a fine exercise in balladry and the closing “Tied And Bound” is full of grit and crunch. All of which means that the local girl done good – again. Joanne Shaw Taylor is up there as one of the finest exponents of blues guitar in the country.

Most people, when they get to 70, might be thinking about enjoying their retirement. Maybe walks in the country, a nice cruise if they can afford it, perhaps. Not Robin Trower.

He decided to usher in his seventies by releasing a brand new record in the form of “Something’s About To Change” (released actually on the guitarists seventieth birthday earlier this month)  and going off a major world tour.

The public have responded too, as the second city’s Town Hall had sold out long ago and there is a genuine warmth in the air when Trower walks out behind his two bandmates Richard Watts and Chris Taggart.

From the opening notes of “Somebody’s Calling” – sung here as much of the set is by Watts, it is absolutely clear that the onset of time has done nothing to dampen Trower’s skills. The playing here is little short of incredible and when he takes the mic to sing himself, as on “See My Life” he does so with an earthy, well worn quality that is perfect for the blues.

The set contains five songs from the seminal “Bridge Of Sighs” record, which is now 41 years old. It’s songs, though, are fresh sounding in the way that only true timeless classics are. One of them, the short, breezy “Lady Love” is a real highlight tonight, as is the dense, thick sound of its title track.

Although Messrs Watts and Taggart are clearly extremely talented men, the undoubted star here is Trower. His soloing is wonderful. Never histrionic, instead his melodic guitar lines give the songs themselves room to breathe. Such a skill is rare, but it makes for a thrilling spectacle.

There is a real variety here too. “Confessing Midnight” is real fuzzed up, dirty grooving thing, as is “Not Inside – Outside” which sees Trower seemingly effortlessly make his guitar almost talk.

“Little Bit Of Sympathy” provides a charged up closer, while the encore carries on in the same upbeat vein. “Too Rolling Stoned” is initially an almost Hendrix-esque romp, before allowing the Trower the chance to do his best work of the evening.

Things are finished off in a mournful way, with “For Earth Below” which is every inch the type of blues that you need at 3am in the morning with the rain coming down. It’s evocative sound juxtaposes perfectly with the previous work and is the perfect way to end.

There is only room for one song off the new record in a set that stretches out for 80 wonderful minutes. Preferring instead to dip into a career back catalogue that’s up there with the best of them. That one new tune,”Snakes And Ladders,” is not out of place in that exalted company, however.

In fact like everything else that was played tonight, it proves a couple of things unequivocally. First Robin Trower is a guitarist to cherish, and second, he’s far from ready to just sit quietly and watch the world go by.