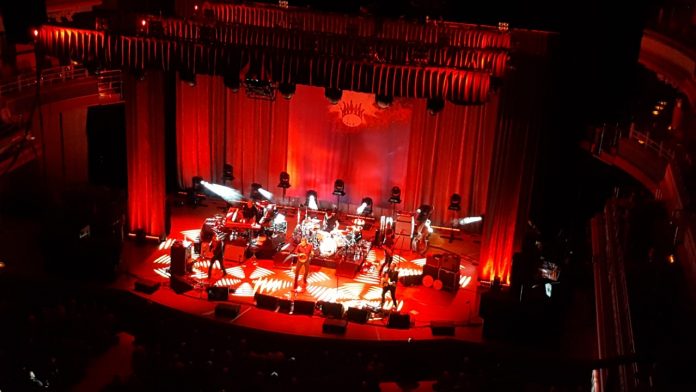 There are icons and there are Icons.

And then there’s Robert Plant. As front man for Led Zep, who played a massive part of my teenage musical education, I was never fortunate enough to see the band perform and with the untimely death of John Bonham most thought that was it. However, I saw Plant in December ’83 as he established a burgeoning solo career, although the music style was very different to Zep and back in those days he refused to play anything from their back catalogue, concentrating on the first two albums.  The last decade has seen him change that policy and revisit his past, albeit often in very different form.

At 69 he has nothing to prove but unlike Jimmy Page, his creative juices have continued to flow and he has produced a number of excellent solo albums with Alison Krauss and with his current band; The Sensational Space Shifters.  The band who appear to have revitalised him have been with him for a number of years now and are culled from very a diverse group of bands including Cast, Massive Attack and Portishead.

When this tour was announced it nearly sold out on the fan club pre-sales, as a consequence we’re sitting in the gods suffering vertigo having struggled through a cold wet night to the equally iconic Symphony Hall. The set opens with ‘New World’ from the new album Carry Fire which whilst plagued with a number of technical audio issues features the first of many guitar solos from Skin, all of which demonstrate what an under rated player he is.

Whilst the sound engineer tries to sort out the problems, Plant points out that it’s seven years since he last trod these boards and tells a few family tales to pass the time.  Seth Lakeman, who provided the support for tonight, joins him for ‘May Queen’ and pops up frequently throughout the show on new and old tracks.  His violin certainly adds a different dimension to a number of the songs but I can’t help feeling that the overall effect is to make too many of them simply too similar to the others.

Describing some of the setlist as being written on papyrus, the band kick into ‘That’s the Way’ the first of the Zep songs which along with ‘Gallows Pole’ are the first songs that seem to partially invigorate the audience downstairs although later he has a dig at them for their lack of life.

‘Carry Fire’ which follows ‘Gallows Pole’ reflects the African beats that have influenced so much of his work from the ‘Unledded’ days through to his latter albums with the Sensational Space Shifters. ‘Little Maggie’, a 1948 bluegrass cover from The Stanley Brothers was brought right up to date with some deep loops from John Baggott reflecting his background in Massive Attack.  Justin Adams, who appears to be the catalyst behind Plant’s revitalisation, got to show his skills with some slick guitar work on ‘Funny in My Mind (I Believe I’m Fixin’ to Die)’.

In a set that is liberally sprinkled with covers, and yes many of the Zep songs tonight are covers themselves, it seems a shame that he chooses to ignore the fertile period that produced ‘Manic Nirvana’ and the superb ‘Now & Zen’ albums, where he abandoned the radio friendly songs to plunder parts of his back catalogue and to rock again.

Plant lets rip far too infrequently, in truth only on ‘Babe, I’m Gonna Leave You’, ‘Lemon Song’ and ‘Whole Lotta Love’ all from his past.  The main set ends with ‘Misty Mountain Hop’ and after a short break they’re back with the final trio of ‘Lemon Song’, ‘Bluebirds Over The Mountain’ and the song that without doubt gets the biggest cheer of the night; ‘Whole Lotta Love’.

The stage show and songs show invention, an awful lot of musical ability but my overriding feeling was that his tone and writing seem to have settled comfortably into a period of time circa Led Zep III. This seems a shame as I saw him a few years ago when he produced a blistering set at the Wolves Civic, leaving us nigh on speechless at the end and a gig that slotted into my top five.

I don’t think that the Symphony Hall suits rock gigs and certainly not if you’re in the gods as we were. The atmosphere was flat and early sound problems resolved it’s doesn’t have great acoustics up there.  It’s entirely possible that those seating and latterly standing downstairs walked away having witnessed an excellent gig.  Next time he tours, it’s back to his home town of Wolverhampton for me.