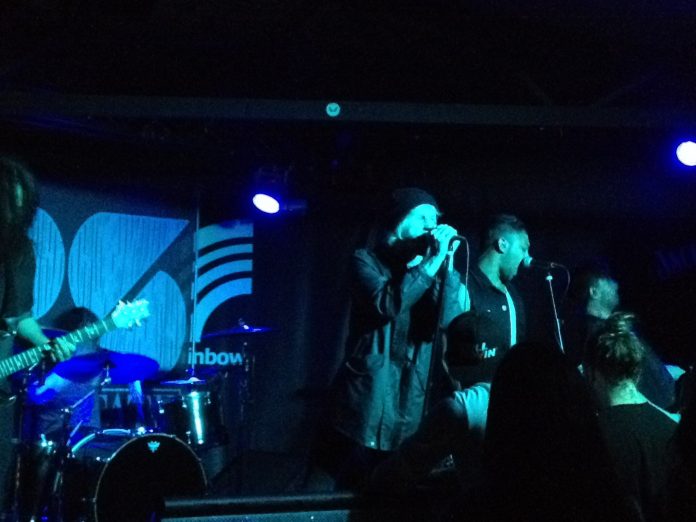 It’s Torous’ second gig of the weekend, having played a festival in Telford yesterday, and the local lads are really becoming a formidable live act. Promise has turned into actual bonafides recently with the release of the “Dried Bones” EP, and their new set is heavy on its excellent material. Tracks like “Occam’s Razor” now sound like they’ve been in the set for months rather than just a matter of weeks, and the closing epic of “Don’t Slip” is destined to become very special indeed. A bit like the band themselves then, surely. As always their medley gets an airing, but the Terminator theme has been replaced by some music from Star Wars. Other than that it’s business as usual, and that means business is good.

Leamington Spa newbies True Heights are a band with big plans. Working with Deaf Havana’s producer tells you as much and their Facebook page claims that they will be the sound of 2015. Lofty aims are only any good, of course, if you can pull them off and True Heights do. And then some. Polished in the way that Exit Ten used to be, but with a kind of Gaslight Anthem ear for a blue collar strut. New single “Frank” is out at the end of the month with an EP to follow. Expect it to be rather good if tonight is a guide. “City Lights” showcases a huge sound well and “Shooting Stars” is not the sort of song that just happens. A band to watch out for in the coming months.

If True Heights are after pointers as to how to do this type of music, they could do worse than give Liberty Lies a call. The local lads are more or less veterans at this stuff and their recent “Fracture” EP was an excellent affair. The set they air tonight is packed full of its songs too. “Undivided” bursts with energy, with the first single “Circles” genuinely catchy. A confident bunch, they also try out new material and “Optimist Pessimist” – so new it hasn’t even been recorded yet, amply demonstrates a band with plenty of ideas. Ending things with the recent title track is a good idea, as its soaring chorus and crunching riffs really hit home.

Rival State are now based in the UK, having moved here from their native New Zealand a while ago. Their career appears to be on an upward curve. They’ve just played Download and their policy of almost constant live activity seems to be paying off. They too have just released a new EP and  “Gutter Mouth,”  is perhaps less varied and more streamlined than 2014’s “Youth Tax.” A few of its number get aired in a short but efficient set here. “Keepsake” has grungy overtones, while “Modern Living” has a huge groove and chorus with designs on bigger places than this. They had kick off with “Sisters Of Fate” – a track released before they emigrated, and there’s some choice cuts from “….Tax” too with “Aces” perhaps the pick. They end an energetic half hour with “Sleep Talker” and this was very much job done again for the hotly tipped five piece.

Refreshingly there was no hint of a hipster scene throughout the evening. Big, hook laden rock music is back back, people. Meet the new breed.