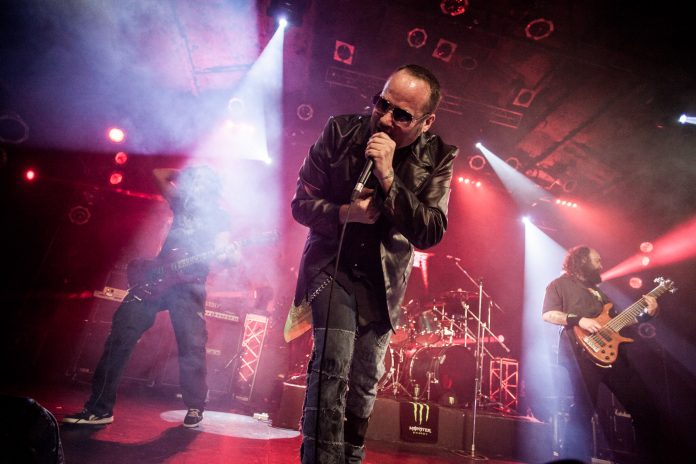 Tim ‘Ripper’ Owens is without doubt among the most important metal vocalists of the past twenty years. When he succeeded Rob Halford, joining Judas Priest in May 1996, the press rubbed their eyes, surprised as well as impressed: Owens had previously been a fairly unknown quantity to international music journalists and only a few new of him from the band Winters Bane, but he recorded his first Priest album, Grammy nominated Jugulator (1997) with more aplomb than even insiders had expected. Following successful tours with the British metal legends, the strong studio recording, Demolition (2001), and the live recordings, Meltdown – 98 Live (1998) and Live In London (2003), and the Hollywood Blockbuster movie” Rockstar” starring Mark Wahlberg and Jennifer Aniston, that was loosely based on Tim’s experience with Judas Priest, Halford’s return put an end to Owens’ stint with Judas Priest. More or less immediately, he was enlisted by Jon Schaffer to team up with Iced Earth and sang on The Glorious Burdon in spring 2004. Three years later, Owens followed suit with the Iced Earth album, Framing Armageddon (Something Wicked Pt.I), which succeeded the self-titled highly praised debut by his own band, Beyond Fear. Spring 2008 saw Owens move on to join One of the worlds best guitar players Yngwie Malmsteen, debuting with a sensational vocal performance on Perpetual Flame.

Tim “Ripper” Owens returns to this side of the pond once more following the successful tour in 2015 and comes to the UK hot on the heels of the South American leg of his 2017 tour schedule. Playing songs from both “Jugulator” and ” Demolition” as well as songs from his extensive career.

Catch Tim at the following shows;

For more info check out