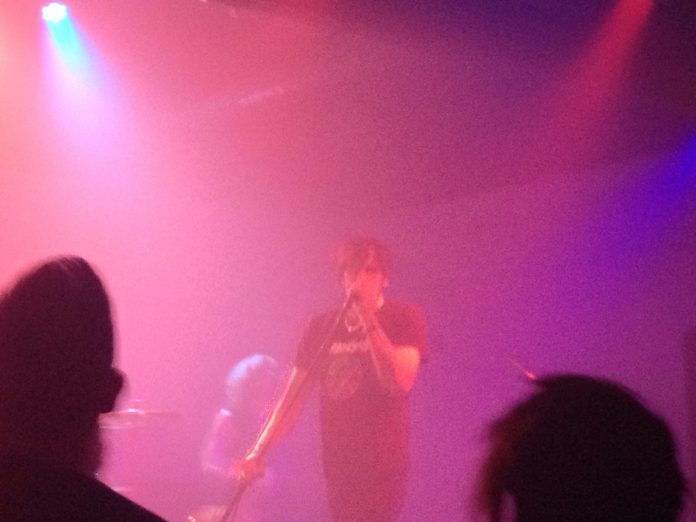 What do you get when you cross the former Ramones drummer, an ex Hollywood producer, a trash n roll band from Leeds and a Thursday night in Birmingham?

When a band says its influenced by Dogs D’Armour and Backyard Babies, it’s a pretty good way to get MVM on side. When they then say they like The Wildhearts too, well, we’ve got much to discuss.

Leeds’ reprobates The Idol Dead not only claim these heroes, but actually do a good job of fulfilling those aims. There’s harmony here that echoes the mighty Honeycrack back in the day and a mighty fine ear for a chorus and hook. Singer Polly, all dressed up in his fishnet top, is at his most flamboyant on songs like “Get Your Boots On” which thump most agreeably in a trashy way, while “On The Edge Of Time” could have come straight off a Wildhearts B-side 20 years ago. That mid-1990s feel extends to “Travelling Man” which doesn’t half sound like Three Colours Red. An opening slot to a crowd that is best described as “not huge” is difficult, but The Idol Dead don’t seem to give a toss. They are day-glo, shiny fun, as their signature tune “I D O L” proves quite nicely.

Much of the focus on Venrez comes from the fact that they are fronted by a Hollywood Producer (Steven Venrez, who decided to follow his passion for rock). But then you don’t get to support Slash, as Venrez have, if you are just playing at playing music, and the four piece (it’s usually five but second guitarist Alex Kane is with the headliner) have a fair body of work behind them. They are in town to promote their third album “Children Of The Drones” and when they get it right, as on its primal title track, they are damn fine – more vital sounding live than on that recently released record too. Venrez himself is hypnotic performer with a real brooding presence and he meshes well with guitarist Ed Womack here. Musically, if Alice In Chains went psychedelic they would sound very like this and the vocal interplay between Womack and Venrez is very neat indeed. Ending here with the first single from “…..Drones,” the huge and swaggering, “Hang The Predator” – perhaps their best moment – Venrez are clearly a rock band with both a serious ambition and a lot of mileage left in the tank.

Speaking of which. Richie Ramone. It can only be a love of punk rock that brings the legendary drummer of the legendary Ramones to a small club in Birmingham’s trendiest new area.

Scuzzy, bratty, snotty and aggressive punk has been his stock in trade for Lord knows how long, and tonight – even at breakneck speed and slightly heavier than you might expect – songs like “Somebody Put Something In My Drink” slam home.

The band assembled here is something of an AntiProduct reunion. On bass is AP member Claire Misstake while guitarist Alex Kane not only used to front that band, but was once in the batshit mental Clam Abuse with Wildhearts frontman Ginger. He’s evidently calmed down since those days. Where once he was sending a “Message To Geri” he’s playing some punk rock classics as well as sleazy originals, the pick of which is perhaps the title song of the new album “Entitled.”

The four can crush when they want to, and “Blitzkrieg Bop” is given a real metal sheen here.

A turbocharged set barely pauses for breath – except when Richie appears stage front and requests we come closer. It appears to be an order.
Elsewhere though, it’s a pretty much non-stop exhibition somewhere between a maelstrom and a punk whirlwind. It’s chaotic and gloriously unfocused, as if it’s been sniffing glue in the dressing room all day. Which means it’s exactly as it should be.

Ramone makes another foray to be stage front for “I Wanna Be Well” and can still just about manage a pogo even after his drumming exertions. There is evidently plenty of life in this old dog yet.

Ending fairly abruptly – he’s just too cool to encore – this was all you expected and more. There are shows that seem – however good they are – a little cold and clinical, as if they have been planned to the last note.

This ain’t one of those. Richie Ramone is keeping the punk rock spirit alive. And for that we can all be grateful.

Previous article
Fools Is Gold
Next article
The Last Nihlosaur