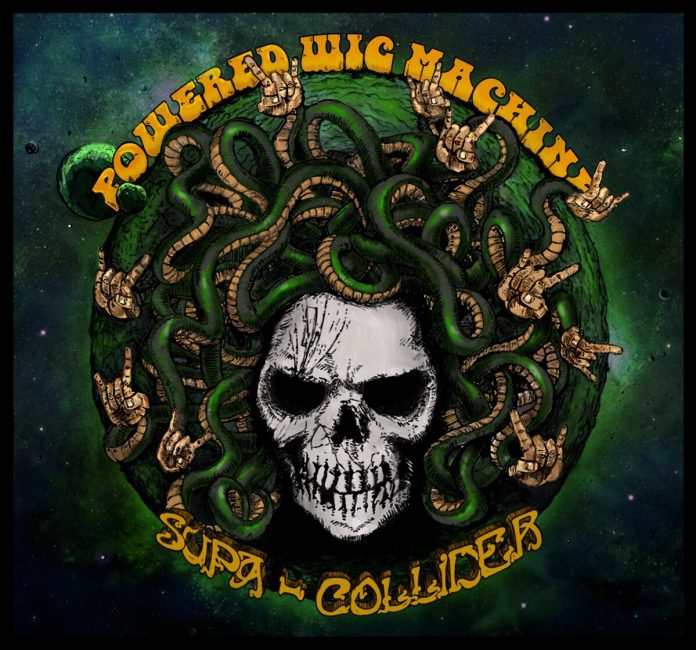 It’s a brilliant fact that, even after all this time, music can still shock. And that just when you think when you’ve heard everything something comes along that just causes you to do a cartoon style double-take.

So it is that about halfway through this wonderful nine tracker comes a song that you have to rewind to make sure you heard it right. So, spoiler alert. If you don’t want to know the answer, look away now:

They follow this piece of insane brilliance with something a little more conventional, but the bass heavy groove of the title track (key line: “we’ve come to the day of apocalypse”) is no less welcome. By this point anyway, it’s impossible not to have warmed to the five piece. There is the not inconsiderable thought that they may be from the place with the coolest name in the world (they reside 12 miles outside Tombstone, Arizona if you don’t mind) and then there’s the music itself.

“Supa-Collider” is a quite superb collection. It begins with a piece of fuzzed-up craziness “At The Helm Of Hades” but it’s striking feature is the use of swirling keyboard to add a early Deep Purple feel on occasion, “Led Masquerade” benefits from this unexpected strand.

Elsewhere “Here Come The Freaks” has the spectre of the mighty Clutch all over it, while “The Brain Of Hank Pym (a Marvel Comics character, if like MVM, you have no idea about such things) almost seems like their State of the Union address, as Rudell offers that “I do it for the women and the whiskey” and you aren’t surprised.

Things conclude with – literally – the most stoner thing here, as “Highish Noon” turns them onto the desert rockers that you always knew a band named after a Josh Homme song just had to be. Even here, though, they can’t resist a touch of self-deprecation as we receive the info that “I’m slow in the sack and quick on the gun……”