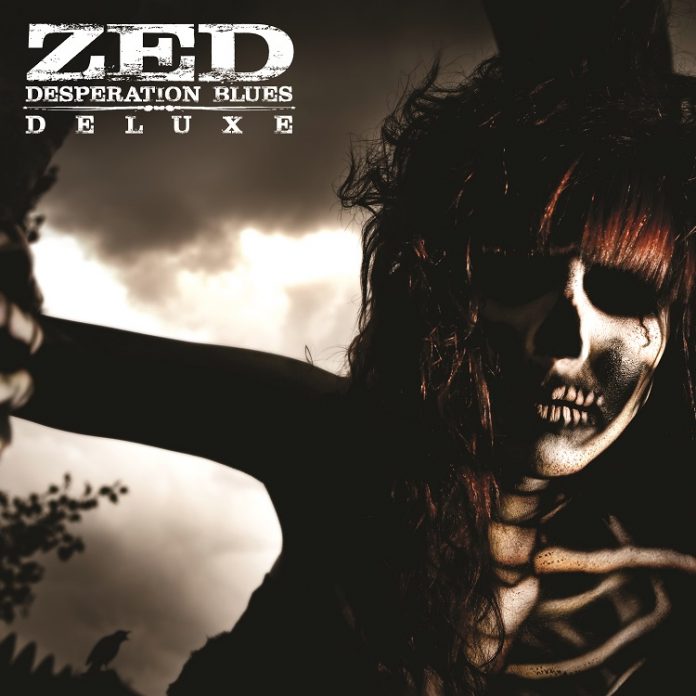 A couple of years back I reviewed an album by a band out of San Jose called Zed. The sort of music that blithely gets called “Stoner” by people like me who look for easy hooks it was actually a powerful critique on the world, marrying huge environmental concerns with massive riffs.

I remarked at the time, although can’t recall why I wrote it this way: “Don’t try second guessing this lot, because they’ll plough their own furrow (probably using organic fertiliser). It makes for a really interesting – and tasty – harvest, mind you.”

What we have here is nine songs that preceded it. “Desperation Blues” is the bands 2013 debut record, which is finally getting a full release at long last.

And rather like the aforementioned “Trouble In Eden” is a superior – and thought provoking work.

One of those records that you can enjoy on whatever level you choose. Whether it’s the primal bass line, of “Please” – the ferocious opening salvo – or the wonderful solo that sees the slow-burning epic “The River” close the collection some 40 minutes later, this is a brilliantly done, marvellously played thing.

But, as the title suggests it has more weighty things on its mind. “Desperation Blues” is nine songs that have more to say than many bands with a fuzzy guitar and a thumping rhythm section. And that’s why they are a cut above.

Take “Please” it does its thing, and it cuts loose. But so do a million bands of this type, but only Zed have the vocals of Peter Sattari, who roars this as if he’s channelling some kind of Chris Cornell type vibe.

Other bands don’t have Greg Lopes either. And goodness, he can churn out a riff. The whole of “…Blues” really is built around him.

There is a real urgency about this too, and it’s an urgency that rather like Crobot, gives Zed a hard rock sensibility, for example “Killing Machine” has a real dirty swagger, to start with but by the time the verse kicks in, try keeping the fists out of the air. This is a metal band too.

The title track does – appropriately – have a bluesy vibe, not too dissimilar from early Monster Truck, it has a groove, but a wilful side too that you just have to love. “Crawl Back To You” likewise, has a southern rock flavour to go with everything else it’s got, while “More” doesn’t so much as land a knockout blow as lurk, before cracking a concrete block of a chorus around your head.

It is noticeable too, that the last three are longer, more experimental maybe. However, one of them, “Rain” is the best thing this has to offer, a quite wonderful meander, it is a storm in its own right. The interesting rhythm and eastern tastes of “The Empty Quarter (Settle The Score)” is perhaps a precursor for what followed on “Trouble In Eden”, while “The River” flows perfectly, giving the whole thing a widescreen feel.

Zed are one of the more innovative bands of this type around. “Desperation Blues” shows it wasn’t only their genesis but their blueprint too. It deserves to be heard. In so many ways these are desperate times.