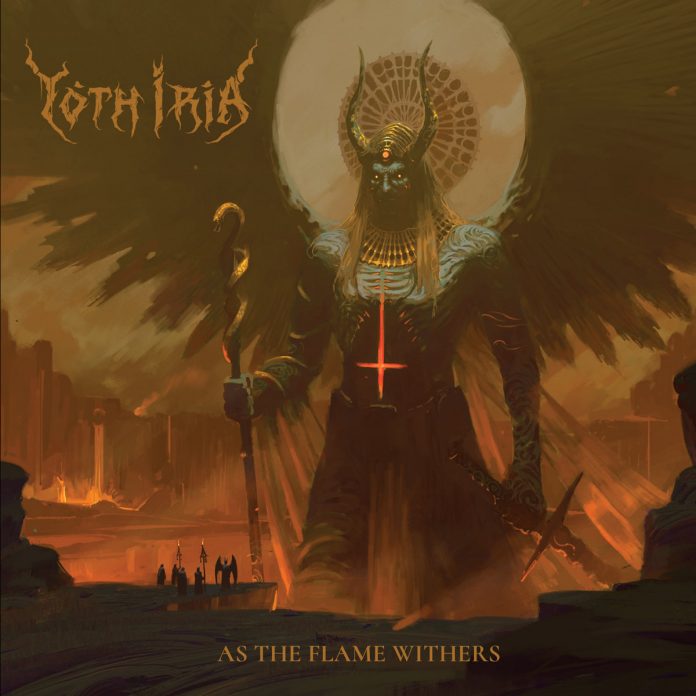 Greek blackened-metal duo release debut album in troubled times and these troubled times call for troubled and dark music in many minds.  Donnie shrouds himself in the darkness prepares for the onslaught.

Yoth Iria are a new face on the black metal scene but have a rich history within its membership.  Bass man Jim ‘Mutilator’ Parsouris was one of the founding members of Greek black metal maestros Rotting Christ and his vocal cohort The Magus are looking a creating and developing the next wave of influential and dynamic blackened metal.

Mutilator officially left Rotting Christ back in 1996 although he did some contribute lyrically to further RC albums.  He has also been in bands such as Varathron and his first band Black Church, who would eventually become Rotting Christ.  The Magus, or Morbid if you wish, is a well-known musician and producer in Hellenic metal circles and their union is now set to herald a new era of black metal in the region and hopefully much further afield.

Last year saw an EP released Under His Sway which contained none of the eight tracks that make up their full debut.  It did however, give a clear indication of the direction for this new band and showcased what we could reasonably expect to here in 2021.

“The Great Hunter” is the first thing we hear and its jagged guitar intro and blastbeat drumming send you headlong into the darkly melodic maelstrom without giving you an option to resist.  Vocally the sound is familiar and faithful to the genre and adds the air of menace and dissonance required in such darkened themes and musical moods.

There are numerous “calm before the storm” moments littered through the album which make the explosive riffs and frenetic lead breaks even more powerful then you would have a right to expect. Tracks like “Yoth Iria”, “The Mantis” and “Tyrants” benefit from this approach massively.

“The Red Crown Turns Black” however is a made of entirely different stuff altogether.  A ferocious, swirling unstoppable tour de black metal force.  Finishing things off is the foreboding six-minute epic “The Luciferian” which a perfect closer utilising all the atmosphere and tempo changes that have gone before and crystalising it into a delicately powerful postscript.

The album was recorded at the famed Pentagram Studios and owner, and fellow ex-Rotting Christ member, George Emmanuel lends his supremely well-crafted six-string majesty to the album which raises this above the also-rans and into the top division of extreme music in 2021.