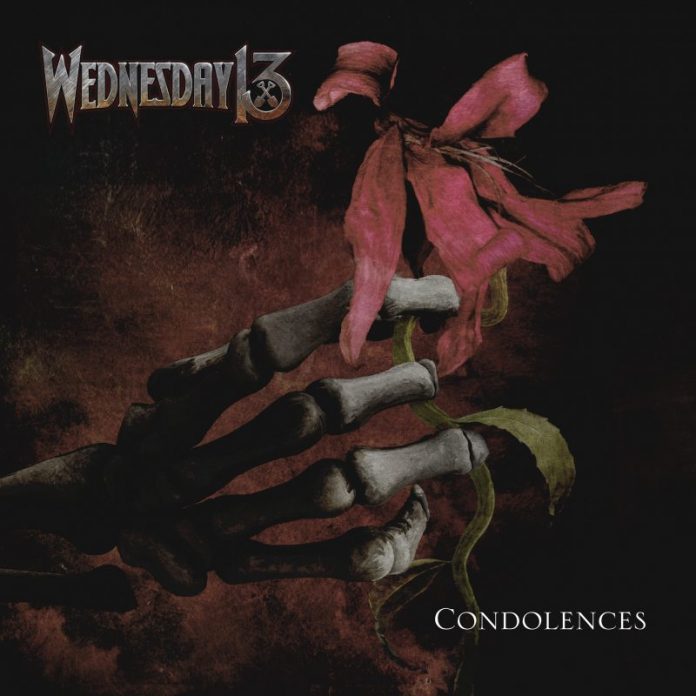 No longer just dolled up

You’ve been doing something, day in day out – give or take the odd country side project, perhaps – for 20 odd years. The chances are you probably need to take it up a notch, right?

That must have been something like what was going through the head of Wednesday 13 when the main man of the same name reconvened the band to make this, the seventh album under his own moniker(albeit he has been one of the more prolific artists of his generation). Because, really, if you thought he was all about sleazy b-movies and was camper than a row of tents, then “Condolences” means it’s time for a rethink.

There are elements of what he’s done before, sure and it is still an album that is choc-a-bloc with horrifying goodness, but it is heavier, darker and a good deal more violent than before.

After a suitably creepy intro, the first clue that this is a different type of record comes with the unsettling strains of “What The Night Brings” and whilst it would be a stretch to suggest it is death metal, it is absolutely the case that the vocal delivery owes a debt to a kind of growl.

Interestingly, that is followed up with “Cadaverous” which could have come straight off “Astro Creep” by White Zombie, but before we get carried away thinking he’s “gone industrial” or some such nonsense, he comes on as a kind of Heavy Metal Alice Cooper on the thumping “Blood Sick.”

And it’s the metal vibe rather than the sleaze one that pervades throughout. “Good Riddance” is as heavy as anything he’s done (drummer Kyle Castronovo plays a blinder throughout, but is especially superb here) while “You Breathe I Kill” could strike up a moshpit at the drop of a hat – its hideously murderous chorus slams  -and there is a tongue in cheek glee about “Omen Amen”, but it is still all about the clenched fist.

That’s not to say its heavy all the way, “Cruel To You” perhaps, is the closest to his former work and is glammed to the teeth, but “Prey For Me” is a very different beast, with its machine gun crunch.

One thing that hasn’t changed is his ability to write superb songs, “Lonesome Road To Hell” crashes the party with an arena bothering chorus, for example. But what he hasn’t ever really done, perhaps is write a genuine epic like the seven-minute title track.

Things even end with a ballad that might, elsewhere, be described as brooding. “Death Infinity” builds itself up into something of crescendo and although you might only want to whisper the word “maturity” it is definitely there.

As an artist famed for his side projects, you perhaps shouldn’t be surprised that one of the greatest rock n roll anti-heroes should wish to stretch himself, but on “Condolences” that’s exactly what Wednesday 13 has done within the confines of his band. The sleazy devil himself has found a metal heart and arguably hasn’t sounded better.