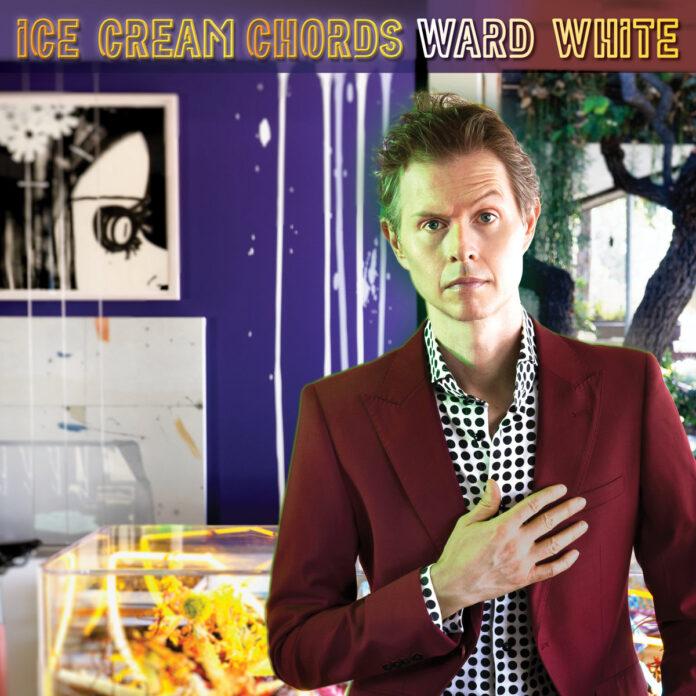 Ward Whiteis aLos Angeles based art-rock crooner whose latest album `Ice Cream Chords` is his fourteenth and arrives one year after the release of his last, the acclaimed `The Tender Age`.

The album was written and produced by White, who also provided all vocals, guitars, and bass.

The release opens with `Shorter` and it`s a delightfully structured three minutes of captivating melodic pop pomp with vocals that at times seem fairly indifferent and might well give the impression that we should be grateful that they have graced this song. There`s a much faster paced but still wonderfully enchanting offering with `Rumors` that has some charmingly understated guitar shredding solos shared along route with synth hues sprinkled through the opening section.

`DeSoto` begins like a retro fifties number with a resonating like guitar riff and the title may be a reference to the defunct American automobile brand but the mystifying lyrics don`t seem to support this. About `Mezcal Moth` the singer has said “The worm traditionally found at the bottom of a bottle of Mezcal is not, in fact, a worm – it’s the larva of Comadia redtenbacheri, a parasitic moth which infests the agave plant. Perhaps exerting its purportedly psychotropic kick” Make of that what you will but there`s an alluring and mesmerising dreaminess about this number that includes a fragment from a sitar mid-way through.

There was a kind of sophisticated late night or cocktail lounge vibe to title track `Ice Cream Chords` which has a rolling drum beat, piano and vocals on this reflective ballad like number. Again, the singer has shared that Ice Cream Chords is “archaic songwriter slang for stock, or hackneyed changes – basically the structure of every doo-wop adjacent song from the fifties; They’re sweet, cloying and difficult to resist, as a listener or a writer”. There`s a brief reprise at the end just when you believe the number has finished. We have in `Like A Bridge` a song that celebrates vintage roadway signage.  I felt it headed into Steely Dan territory with an underlying delicate piano and odd synth buzzing with some harmonising tambourine percussion added into the mix.

`Born Again` is a fairly robust but compelling submission which has a driving drum beat and intermittent piano keys with vocals that relate a rapid fire narrative at times.  We enjoy a more elegant offering with `Horses` which has some gently sung breathy vocals sprinkled over this stylish composition.

The bizarrely titled `Prominent Frogman` is another thoughtful and introspective piece with tender vocals layered atop. There`s a conversational narrative on `Signore` which has a nigh on European flavour in its delivery.

Commercial radio stations typically broadcast at 50,000 or 100,000watts which may well explain what `50,000 Watts Ago` relates to. It`s a fairly rocky number with some intricate guitar chords and a continuous drum beat setting the pace for this number. The album closes out with the quirky `Slouch` a word that usually equates to being lazy but here this song is anything but. It`s a wistful and well delivered melodious track.

I thought `Ice Cream Chords` was a marvellous introduction for me to the wonderful world of Ward White. It’s a release that is bursting with ideas that are so well thought out and presented. This artist almost appears to be an American equivalent to British pop or art rock new wave bands such as Gene, My Life Story, The Divine Comedy, The Associates and has that acerbic poetic wit of writers like Jarvis Cocker,  Neil Hannon or Peter Wilson (Duke Special).

This album is a true delight and no better an offering to close this year out on.

Previous article
GET IN YOUR CARAVANS
Next article
REVIEW: JOHNNY MAC AND THE FAITHFUL – MIDNIGHT GLASGOW RODEO (2022)