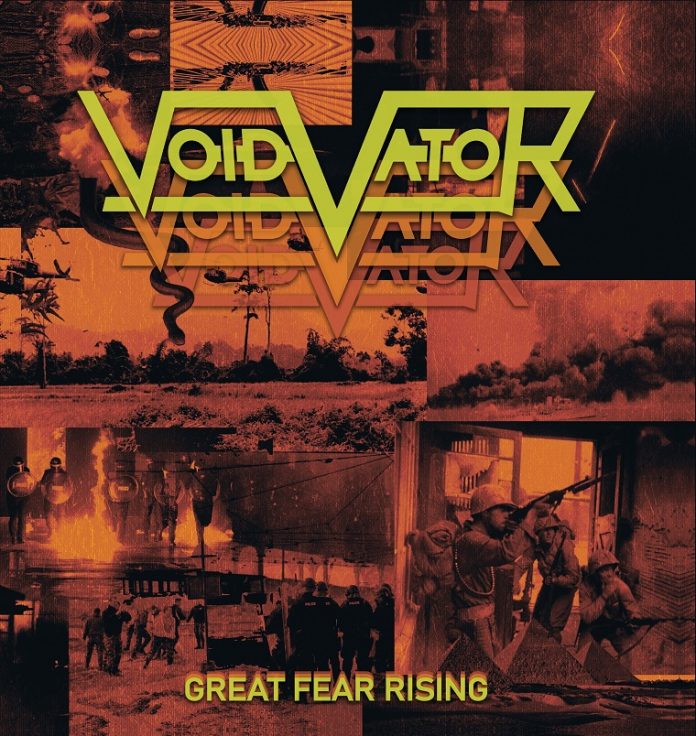 Well, not this time. And here’s why: In 2019 I reviewed a record called “Stranded” by Void Vator. Stranded, I said, right here “is a fresh, original take on a style that you all know. Void Vator are a band right from the top draw.”

Now, pretty much I can do the same review again, because “Great Fear Rising” is essentially that, all over again.

There are differences this time, as you’d expect with Michael Spreitzer of Devildriver at the production helm, but basically, they are the same band they’ve always been – the one that proclaims simply: riffs, hooks and leads on their Bandcamp page.

And goodness me, there’s a lot of them. The nine songs here have about a million riffs, 5 million led breaks and every single one is entirely convinced that it was denim and leather that brought us all together.

“…..Rising” is heavier and faster than before, but it doesn’t sound like anyone else. “I Can’t Take It” also suggests that “I can’t fake it” and that’s very much how the record feels. Real. By musicians who love what they do.

“I Want More” has a turbo charged gallop, then the verses are pure 80s sleaze. And that’s kind of how it goes, this is metal by pick n mix. A buffet of everything that’s cool.

“There’s Something Wrong With Us” (there really isn’t) chugs along like the best punk n roll from the mid 90s. Or the Foo Fighters after listening to a load of Iron Maiden at a push. I questioned if they were a thrash band a couple of years back, but “Losing Control” is very much a thrash tune. A good one too.

But don’t get the hi-tops out too long, because these boys don’t like to be in one place. This is an album for someone who has the attention span of a two year old with ADHD (probably why I like it). So it is the title track is the heaviest, perhaps, has an epic air and still carries on like it would slash you in a dark alley.

“McGyver’s Mullet” lives up to its title and has something of Turbonegro about it. “It smells like piss but it tastes like coke to me” makes no sense, but as lines go…. It sort of sums this up!

“Poltergeist” remembers it was released on Ripple Music and is a fuzzed up groover. Orange Goblin fans get yourself on this one, and just when you think this record can’t get any better than it already is, then it does. “Inferno” is like an explosion of Sabbath and Thin Lizzy, and something very greasy. Its quite brilliant, and there’s such a joy in the very last solo that you just get swept along.

And quite brilliant is a phrase you could use for the album as a whole. One of those bands that you’d just love to champion and see break like in years gone by. Void Vator are simply one of the best bands in modern heavy metal.