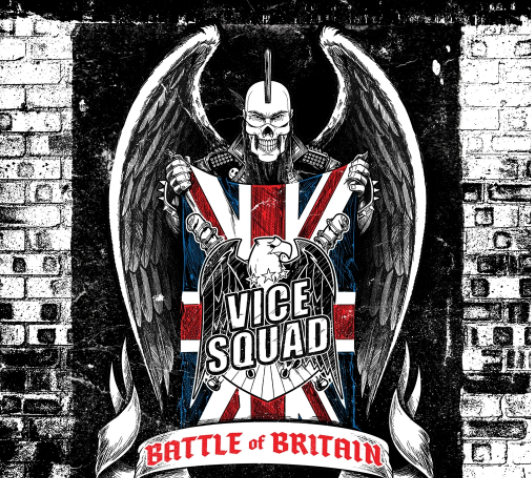 About four years ago, give or take a few days, I saw Vice Squad play live.

They were opening for Ricky Warwick, and looking through my review of the night, there’s a passage that caught my eye: They were about to play a song called “Punk Rocker, when I wrote: “I’m sorry,” says Beki Bondage, “we seem to be having some technical problems.” Guitarist Paul disagrees. “Nah I am just pissed,” he grins “I call that no problem at all….”

I tell that story because it seems to me, more than anything to inform the spirit of “Battle Of Britain”. Everyone in Vice Squad – the band have been going in one form or another since 1978 – is making this record because they want to. Need to, possibly? Either way, there is plenty to say on these 13 songs, of fury and noise.

And let’s be fair, there’s a lot to be angry about right now. Perhaps that’s why this gets straight down to it? Whatever, there’s no preamble, no foreplay if you like, just straight to business.

“Ruination” sets the tone for the record too. Beki Bondage spits the vocals, over music that walks a line between  punk and metal just like the first Iron Maiden record.

Appropriately – given the title perhaps  – this is a very British take on things too. In the first verse Beki sings about “getting your knickers in a twist” and this Britishness is actually a massive part of the appeal of the album.

“I Dare To Breathe” (“I choose the path of most resistance” seems a key line here) is fast, furious and mighty. Rooney’s guitar is superb and there are the odd echoes of the recent Raven record in feel and tone.

“When You Were 17” is perhaps the best thing here. As she reminisces on a past, and wonders plaintively “what happened to that angry young man?” you are left thinking of the irony, because for Bondage and Vice Squad this isn’t the past at all. Instead its very much in the present, and the anger flows through this.

“Ignored To Death” is more punk, and takes apart the mental health provision in the UK in three minutes, while in many respects, the slamming “Born In A War” begins the fightback, because after that, no prisoners are taken anywhere. “Rationalised austerity” is a fabulous slogan that I’d like on a t-shirt, frankly and it’s one of the lines here.

The title track is mighty. Rounding on the “besuited hypocrites”, Tory misrule and public schools all in the space of three minutes is good enough for me. And with this extra shot in the arm, “…Britain” gets even more vicious as it muses on privilege. “Pretend you fucking care” is a chorus on “Poverty Face”, for example, and the supremely good “How The Other Half Lives” is absolutely what punk rock should do.

It’s modern too. While the spirit is 1978, the sound acknowledges that the world has moved on, which is why “No Evil” and the likes work. “Mainstream Media” almost dares Murdoch and his mates to take them on, and if “You Can’t Fool All Of The People” rather fooled you at the start by being a ballad, then there are Euro power metal bands that would kill for this.

There’s no rules, you see. Which is underlined again on “Pulling Teeth”, a withering put down of relationships, and Lord help the bloke who has upset Beki here, my thoughts are with him.

“Battle Of Britain” proves that while the struggle is never over, not really, it makes for great music and this is a collection that is way, way better than it has any right to be at this stage of a career. Mellowing with age does not apply here.