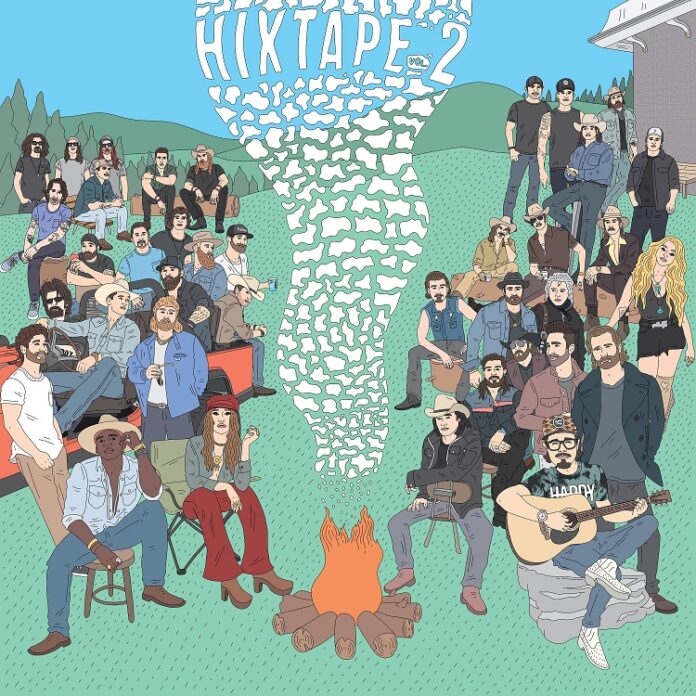 In Autumn 2020 I wrote a review of a country album. Not unusual, for a bloke who doesn’t own a truck or a check shirt (and lives in the middle of England) I love country music. Hardy’s “A Rock” was superb too.

Well back in 2019 Hardy got a load of country stars together for some duets. They became “Hixtape Vol 1”. Well, as the press release for “….Vol 2” rather euphemistically puts it, “The series now expands to become bigger than any one star, with 14 new tracks and 33 artists in total.” Which – I’d wager – means that the good people at Big Loud Records saw a good thing when they’d stumbled on it and made things huge.

Most of them have been on these pages, for no other reason than their songs are ace. Just imagine how good they are all together then?

The opener “Hometown Boys” is built around a rock drum pattern that Tommy Lee would have done in 1986, but here’s the thing. You know what you’re getting with every song here: hooks. Choruses and the very, very best in modern country.

Whether you like it or not, well, that rather depends on whether you’re on board with Bentley when he sings “you’re never too old to wear a turnaround ball cap”. I don’t own one but the sentiment is real.

“WD40- 4WD” is one of the best here, Jimmie Allen has a knack, somehow. The slightly different version of Larry Fleet’s “In Love With my Problems” can’t diminish the quality of the song, and the three-way between Hardy, Brantley Gilbert and Colt Ford “To Hank”, seems to underpin the whole vibe. Classically inspired but modern, and lets be honest, if you can’t hear The Doobie Brothers in the chorus then I give up.

The more pop overtones of “Small Town On It” is perfect for Scotty McCreery, who is one of the people on it, as at were. And there’s the kind of tongue in cheek stuff that this type of record lends itself to on “Break Your Own Damn Heart”, while “Drink Up” is an arena rock anthem, pure and simple.

Theres been one of these songs released for 14 weeks since the autumn before this came out, and the fact that they’ve all been de-facto singles might account for why they are all so damn catchy. “Jonesing For Some Jones” gets in the honky-tonk as a homage to George, and “Red Dirt Clouds” changes the feel totally and things get so much more laid back.

Hardy’s back for “Beer With My Buddies” and there’s some genuine metal guitar licks, before the masters , TC3 team up with him for “One Of Y’All”,

You want to know the catchiest one? “I Smoke Weed” from Ashland Craft and The Brothers Osborne. I don’t take anything stronger than Rennies, but try getting it out of your head.

Chase Rice, Lainey Wilson and Granger Smith do a brilliant job on “Beer Song”, while Chris Shifflett is all over “Going Nowhere” which is basically a hymn to the county roads.

And that – as I’ve said before – is what the point is. You couldn’t write songs like this about the town on the outskirts of Birmingham that I live in. Here, though? We can all get into a world where “I don’t need anything but fried chicken and crickets” and lose ourselves in something that’s part country and part arena rock for 45 minutes.

More than anything though, “Hixtape Vol 2” is just damn good fun.

Previous article
IN THE DOCK
Next article
BAND OF THE DAY: SPIRITS OF FIRE