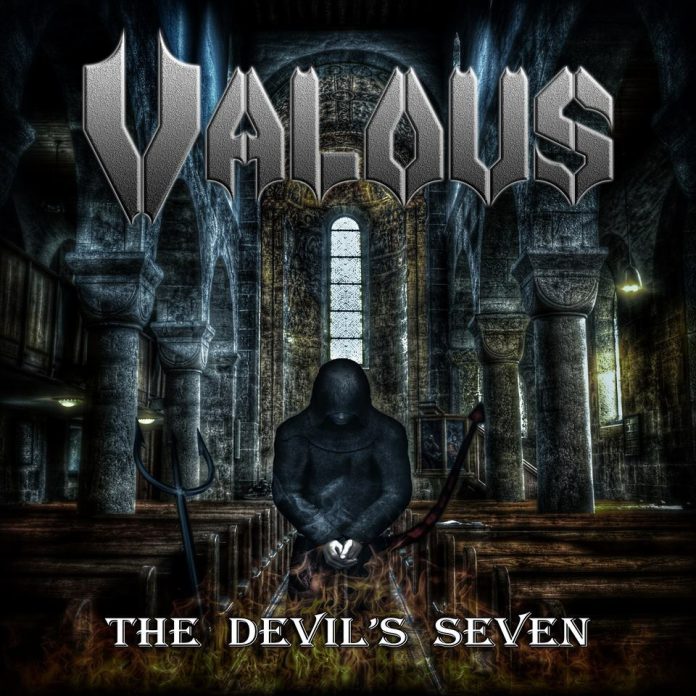 It’s one of the biggest cliches in music. Go and watch a gig in the second city if you don’t believe it to be true. Go and see any band with half a mind on denim and leather when they tour the UK and you can bet your life someone will say that they are honoured to play “the home of metal.” It’s nice and all, and it’s respectful, but what if you are a band with a metal heart from Birmingham. Can you imagine the pressure?

You could wilt and die under the unprecedented weight of what has gone before, or you could do something else. You could do what Valous have done here. Nod politely at their heroes and use them as a starting points before giving the thing a modern twist.

A kind of concept album (each of the songs deals with one of the deadly sins) “The Devils Seven” is a supreme piece of, if you will, modern classic metal. Right from the tolling bell at the start, it is a superbly conceived record which offers much.

“Vengeance Be My Guide” brings with it a hook that confirms without doubt that this unashamedly metal record, but there’s a melody about the chorus, a chug about the chords that isn’t some straight ahead pastiche. The meaty grooves of “Unoriginal Sin” – which features LC Decoy of fellow West Midlands brothers in arms Left For Red – gives plenty to chew on in the type of way that Blaze Bayley’s solo stuff used to do at its best.

“The Devils Seven’s” best moment comes at its halfway point, as if the band themselves know they’ve got something special as a centrepoint. After initially coming on like latter day Iron Maiden, “The Dark One” – all near nine minutes of it – is a compelling journey that very neatly distils everything that’s excellent about the entire album into one very handy piece of work.

The heavy “i-Rot” brings with it a type of foreboding, as well as a galloping riff and a genuinely catchy chorus, and “My Demise” is a fitting closing track on a brilliant record. You don’t want things to end on a whimper, and instead the downtuned groove here does anything but.

Valous are stalwarts on the live scene, and it shows. Some of the songs here are already live favourites and rightly so. The ones that aren’t will soon join them and most bands will be guilty of the sin of envy after clocking this.

On this evidence, metal in Birmingham is just fine thanks. It was invented there, you might have heard.