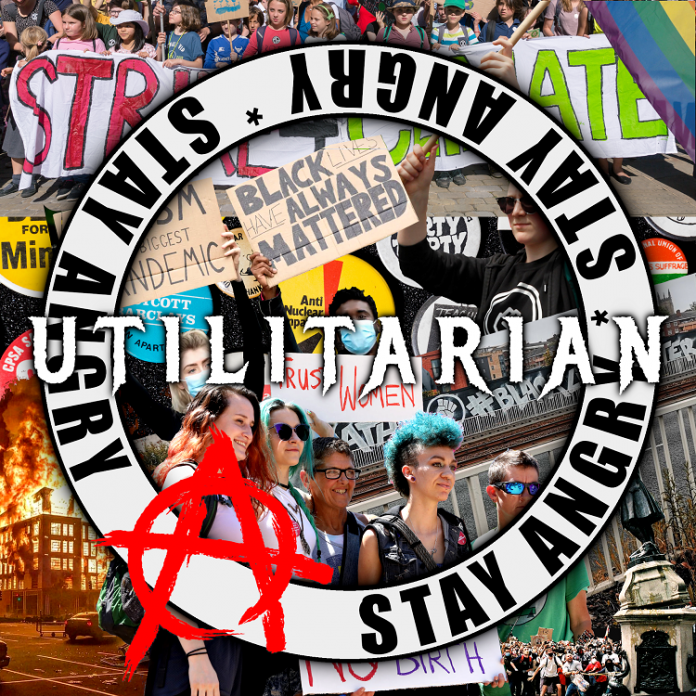 “So far as I am concerned [Tories] are lower than vermin. They condemned millions of people to semi-starvation. I warn you young men and women, do not listen to what they are saying, do not listen to the seductions of Lord Woolton. They have not changed, or if they have they are slightly worse.”

Essentially, the Conservative Party has always been scum. The words above are from Nye Bevan’s famous speech in 1948.  In 2020 they voted to starve kids.

Utilitarian, are not a “band”. They are a moral code. The belief that everyone is born equal.

And over the course of the three original songs and two covers on “Stay Angry” they take a broken bottle to the throat of the corrupt and they take back what is ours.

Never mind the music for a second – its sort of like a more punk rock version of Napalm Death if you want a ballpark – it seems to me that the whole crux of this thing will hinge on whether you agree with this sentiment from the last track “ACAB (Order Without Justice)” “The system isn’t broken, the system hasn’t failed,” screams vocalist Jon Crowder (with the greatest respect to him, you can’t call him a singer) “its running exactly as planned.”

See if you believe, as I do, that the biggest deception of the Tory Party is to turn the working class against each other, this is probably something you should investigate.

“Stay Angry” (the song and the wider EP) is nasty, uneasy listening. Police brutality and the system that allows it almost demands it, I suppose but this is genuinely crushing and fast as all hell. Somewhere beyond thrash (that said it’s five minutes long so its not hardcore either), has a touch of Dripback about it.

This is more than just a piece of music, though. It is more, even than a soundtrack for your righteous anger. Instead, this is a concept and, a little like The Levellers, perhaps, it’s a movement, a collective. The wonderful “Anarchy (Justice Without Order)” in that context, surely becomes a manifesto.

On the aforementioned closer they spit out the names of people that have died at the hands of the police (including ex PL footballer Dalian Atkinson) and urge “say their fucking names.” And as much as this is unvarnished hate laid bare, it is incredible and compelling.

There are two covers too. Doom’s “Police Bastard” and Dead Kennedy’s mighty “Police Truck”, and both are turned into their own.

There’s a cliché here that says: “the revolution starts now”, but in truth “Stay Angry” deserves better than something glib. This is vicious music for a vicious time, and ok, they might be preaching to the converted, but it needs saying.