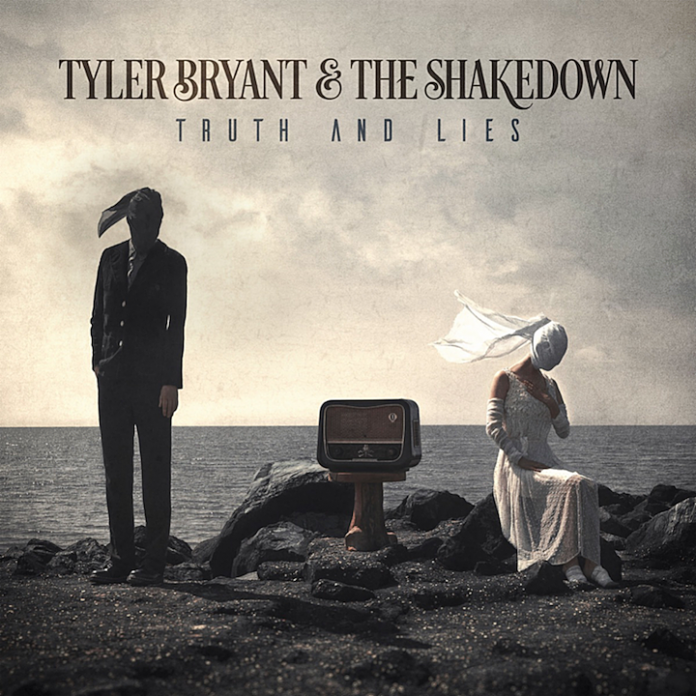 So sings Tyler Bryant on “On To The Next”, the second song on The Shakedown’s third album, and even if you don’t want to sit analysing the mindset of someone you haven’t met and only know through their songs, it feels like he’s reminding himself.

“I’m gonna run out like a bullet from a gun and let everyone know I’m here to give ’em all I’ve got,” says Bryant of his approach. That feeling is all over “Shock And Awe” – the opener here. More hard rock than previously, maybe, it is strident, aggressive almost. Whatever, it is a statement and a half.

The aforementioned “….Next” is the best thing here too. And the line about “onto the next” again is spat out with conviction, as if it is a mission for everyone here.

“Ride” is more bluesy, a little more primal, if you like, but it has the flavour of something that latter day ZZ Top would be doing, and Billy Gibbons would be pleased his former touring buddy has learned so well.

Where “….Lies” scores, is it has the same coat of many colours that the 2017 self-titled record did. “The Shape I’m In” sounds fragile, more confessional, but as if to prove the point that you categorise this at your own risk, the very next song “Eye To Eye” is as proud and resolute as arena rock gets.

Bryant is a wonderful guitar player. He gets tones others don’t, but there is a rhythm and a way of delivering things like “Panic Button” that doesn’t follow a formula, and if nothing here is too long, then “Judgement Day” as much as anything expands the sound still further.

“Drive Me Mad” releases the handbreak. Races off and has the biggest of big grooves, but there’s a 90s feel here through some of them as well. The word “grunge” never meant anything anyway, but there’s a Seattle type grind about the pulsing “Without You”.

“Trouble” is the most classic blues, and there is a wonderful acoustic blues flourish about the gorgeous love song “Out There” which not only recalls Chris Whiteley, but also sounds more mature than a 28-year-old has a right to. I guess when you’ve spent half your life on the road it is different.

Not just because of its name, but “Cry Wolf” could be some just unearthed Andrew Stockdale or Wolfmother tune, and the last one “Couldn’t See The Fire” ends things with just as much class. The way it finishes is also telling. With a brilliant solo, as if to show Bryant could have done that whenever he chose.

There was an interview that his record company sent around in the run up to “Truth And Lies” and it pretty much underlines the atmosphere of, if not quite make or break, then something close: A fan had tagged the band on a message noting their many fans amongst the most illustrious names in rock ‘n’ roll,” says the piece. “He said: ‘If Jeff Beck and AC/DC and Guns N’ Roses and ZZ Top and Chris Cornell like Tyler Bryant & The Shakedown, so should you’.” Bryant pauses. “And I thought: ‘You make a damn good case, kid’”.

And that’s where the band – and The Shakedown is very much a band. Drummer Caleb Crosby has been with Bryant since the latter moved from Texas to Nashville to start a group when he was 17. Bassist Noah Denney and guitarist Graham Whitford make up the quartet – find themselves. They’ve paid their dues more than most. They’ve opened for all the mega bands mentioned above, and they are an amazing live act in their own right. It could possibly be argued that they’ve never quite captured their gig magic in the studio – and I’ve seen them on the biggest stages and in tiny clubs and will attest to how incredible they are.

I’d still argue that although “Truth And Lies” is marvellous, and their most diverse work, I am waiting to see these songs played onstage before they truly shake it down.