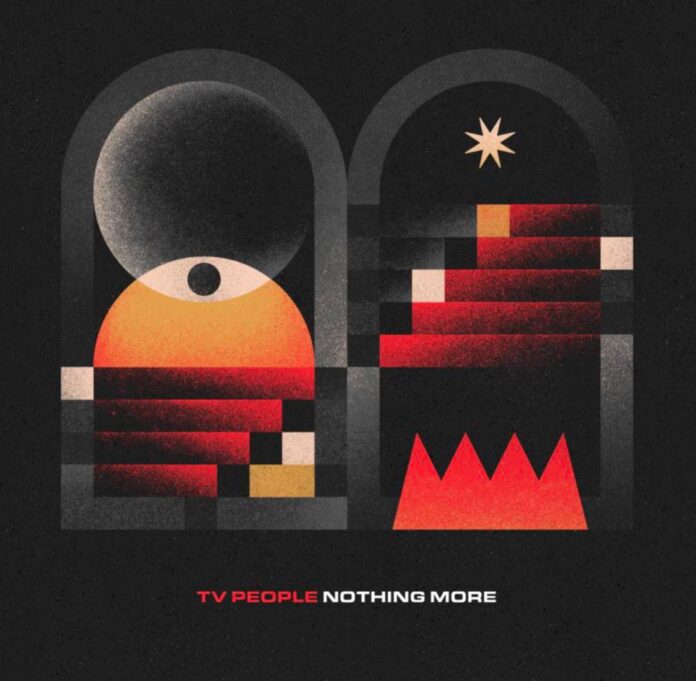 TV People are an alternative rock band from Dublin comprising Paul Donohoe (vocals, guitar) and Brendan Clarke (drums). They have a five track EP `Nothing More` out this month which includes some previously released tracks and a brand new number.

This extended play begins with `Shallow Minds` which opens quietly and builds as it progresses. It`s a number that explores the loss of a friend. The band have said “The song is about being at that point of no return with a friend and laying all of your cards on the table to try and pull them back to you before you have to cut them out of your life for good”. The track seems to increase in sound as well as gather pace as the frustration of the situation almost flows over into anger.

We have a more stirring nigh on garage rock feel about `Kitchen Sinking` which the guys have related is about the tensions caused by conflicting societal views. “The song is about the extremist nature of disagreement in the world at the moment and the inability for people with different views to find common ground or mutual understanding. Kitchen Sinking is a term used in an abusive relationship for when people continuously barrage their partner with negative comments one after the other to break them down psychologically. We felt that this was a fitting description of what’s going on in the world at the moment on a universal level.” There were some delightfully intricate dreamy guitar chords and a complementary drumbeat that led us along this quite mesmerising offering.

String` is a really interesting submission whose lyrics ruminate on addictions and self-destructive behaviours. The singer has shared that “The song is about my past experiences with addiction and using self-destructive behaviour as a coping mechanism for life’s problems. It`s about the feelings of hopelessness, regret and frustration that I’ve felt in the past when I’ve been stuck in that situation and the damage that they do to your mind over time.” The vocals are delivered in a kind of matter of fact manner not looking for sympathy but evoking all of the difficulties associated with the situation shared. The guitar chords, bass and drums were sympathetic in allowing a platform for the singer`s vocals to relay his message.

`Out Of The Silence` was inspired by the band`s home city and was written during the pandemic when everything was closed, and the weather was dark and grim. The singer relates that he found solace in the fact that the city was indifferent to everything that was going on in the world around it and started to reflect on the fact that I needed a bit more perseverance in my own life. It`s another musically quite hypnotic piece until halfway through where there`s a more hurried drumbeat and vocals that share a repetitive like mantra before returning to the more shoegaze vibe of earlier.

This release closes out with `Nothing More` which is a more ethereal piece. According to the band the song documents the experience of trying to make peace with the realisation that life may be inherently meaningless and deal with the burden of being responsible for your own life’s purpose. It was written remotely during lockdown with the guys sending each other music and mixing a home demo. It has that sort of remotely introspective reflective feel which is at times very entrancing and spellbinding.

The `Nothing More` EP was marvellous introduction for me to the charms of TV People. Their sound blends some darkly melodic indie and garage rock undertones with some thought provoking and maturely contemplative lyrics delivered by a singer who has a wonderfully captivating vocal range.

I`m sure there`s a lot more to come from this stunning band and I can`t wait to hear it.