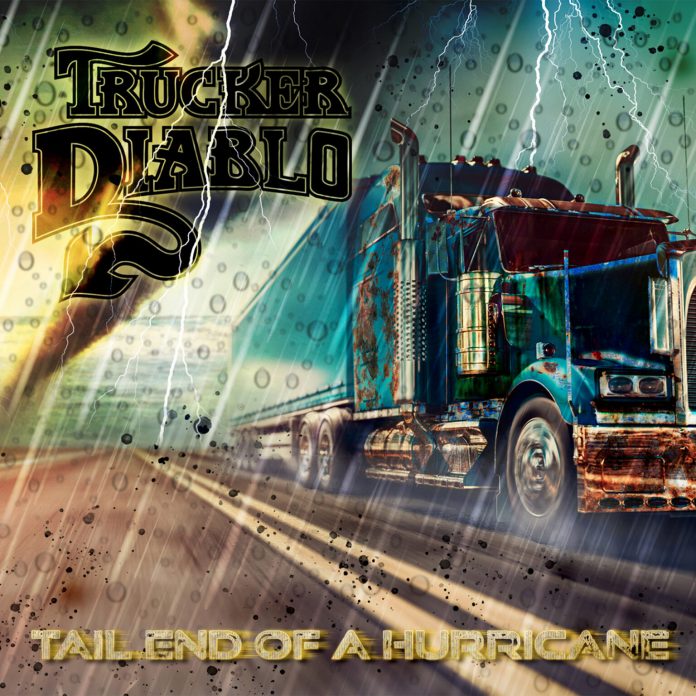 It’s funny, you know. I launched this website on 1st September 2014, and since then, I must have written getting on for a couple of thousand reviews.

Listening to “BTKOR”, the opening song – actually, its not a song, it’s a statement – on “Tale End Of A Hurricane” I’d got a couple of thoughts: “band that deserves more”, was one. “Breakthrough” was another and I knew I’d seen them way, way back and predicted that they were going to be stars. The problem with this all was essentially this: upon checking, I discovered that I’d written the basic same stuff the last time I reviewed one of their albums, 2017’s “Fighting For Everything”.

Now, the point to this is that a) I can’t be accused of plagiarism when I am plagiarising myself, right? But rather more prosaically, b) Trucker Diablo have got a problem. A decent one to have, mind, but nonetheless its this: How long can they (or any band come to that) be so consistently good without getting their just rewards?

They are utterly fabulous, simple as that. Rewind to that opening song. If Black Stone Cherry had got it, they’d be filling arenas with it. The chunky riffs thunder, and if you haven’t got your denim clad hands up in the air when Tom Harte insists you “raise that beer” then they aren’t for you.

Back in the day, there was a band called No Sweat – who like TD were out of Northern Ireland  – and you best believe thoughts turned to those early teenage years watching them on The Rock Chart on the Chart Show on ITV on Saturday mornings when you hear “I Am Still Alive”.

Their status as rock fans is underlined by the words to “Rock Kids Of The 80s”. A feelgood anthem if there was ever one, and I am assuming (safely I think) that me and them have a lot of the same records and grew up with similar taste.

This is perhaps a more diverse record than before, though. There’s an energy to “Don’t Hold On To Hate”, a real chug to “Set The Night On Fire”, a good time glam, but there’s a southern swagger, I kind of want to reference The Answer, but that seems so lazy, given TD are just tougher somehow – a fact that the title track almost underlines with its groove, and the fact they could play a biker rally no problem.

The one that stands out, though, in this fresher outlook is “Insects” and its almost punky, thrash energy. I know attacking social media always gets bonus points here, but its more than that with this (although “their fake as shit Instagram’s” rather sums it up), it’s the anger, the rage, but the ability to channel that. True quality.

Their skill as musicians is shot through “Edge Of Tonight” too, AOR tinges, a bit of FM, but the mid-paced stuff of Jovi circa “Keep The Faith” is all over this. The blues of “The Trade”, that’s more widescreen, underlining perhaps, the texture of the record, and the metal guitar of “This Burning Heart” is wonderful as well. Think Thin Lizzy in the heavy latter period.

A greater maturity in the words perhaps, “Woodstock To Vietnam” is as thought-provoking as rock gets, and seems in keeping with everything else here, yet it is all about groove too. “Slow Dance” – scanning the tracklist anyway – seemed like it was going to be a ballad, when it hits though, I don’t mind admitting that I found myself doing one of those involuntary head nods you do at gigs in time with the riff, while the last one “Bury The Ocean” is slower, heavier, yet at the same time more melodic and fragile. The most ambitious thing they’ve done, fitting then, that it ends the best album they’ve done.

Ironically, given how much I hate social media, I had to go on Facebook to find the band member’s names, while there, I saw their bio: 4 Rock fans making rock music and drinking beer…Enjoy and whilst that’s lovely and good luck to them, you read it and you almost want Trucker Diablo to know how good they are. I’ll help them. “Tail End Of A Hurricane” basically blows nearly everything else away.