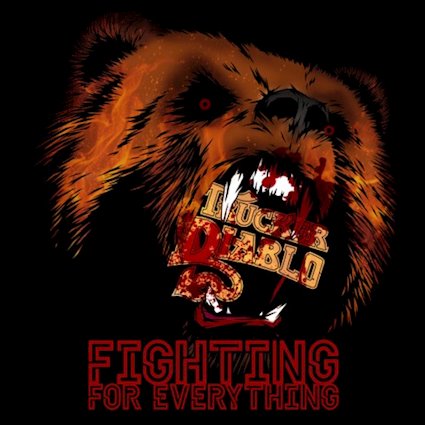 Yeah ok, there’s nothing more boring than old men sitting around reminiscing about when it was all fields around here, but time really does fly.

When this – the third record from Northern Ireland’s Trucker Diablo – arrived in the inbox at MV towers, we had to search through the memory banks (and the two blogs that preceded this site) to come up with when we’d first seen them and marked them out as ones to watch.

It turns out it was over five years ago when they opened up for Terrorvision in Wolverhampton and we wrote that we’d found new stars.

Sure, they’ve flirted here and there with success (songs on Rock Band, touring with Foos’ and opening for Thin Lizzy in Belfast (and to be honest if I’d been in a band that had done that I’d have probably quit right after. How does it get better?) but they’ve never quite made the breakthrough their talents have deserved.

Because, make no mistake about it, “Fighting For Everything” is the sound of underdogs barking loudly.

Indeed, far from being downcast about their lot, TD are here for a party. There are distinctly early Maiden overtones about the opener, “Born Trucker” and when singer Tom Harte suggests in the chorus that “we’re gonna own tonight” you best believe he means it.

So many styles pervade “…. Everything” that it seems like its their very own compilation tape. Essentially, they just have plenty of business to do in these 11 songs and moreover, whatever they throw at the wall, it sticks magnificently.

“We Will Conquer All” is an absolute treat. Some classic Saxon stuff, mixed in with Orange Goblin’s ear for the downright filthy, while “Drown In The Fire” mixes some swampy southern rock with a huge riff.

Best of all, though, is “Voodoo II” which not only achieves the feat of sounding like later period Almighty, it also sounds as gleeful as “Whole Lotta Rosie” before its first verse is done.

That is not to say the rest is shabby, however. “Lets Just Ride” is a mighty stab at AOR, while the title track – surely a metaphor for their career? – recalls MV’s early 90s faves (and Trucker Diablo’s countrymen) No Sweat in its sheer fist in the air stoicism and “Over The Wall” has the same arena bothering intent of Zico Chain (another band who should have been huge).

The thing about Trucker Diablo is this: they keep it simple. No “post” this, “core” that or any other bullshit made up names. You can give songs like “Detroit Steel” whatever epithet you like, it is really just hard rock in its purest – and best – form, not that they are staying still for any length of time, because they merrily follow this up with the Motorhead type rumble of “Die For You”.

More than anything, perhaps, it is the last two that really show the skill here. “Pocket Full Of Changes” is everything that modern classic rock (if that isn’t an oxymoron?) should be, while the Celtic flavourings of the gorgeous, yet heart-breaking, ballad “When The Waters Rise” are quite brilliant.

All of which adds up to one thing. “Fighting For Everything” is fabulous. Will it get them the big break they deserve? Only time will tell. What we can say though is that artists such as Bon Jovi and Bruce Springsteen were fighting for everything until their third album’s came out too.