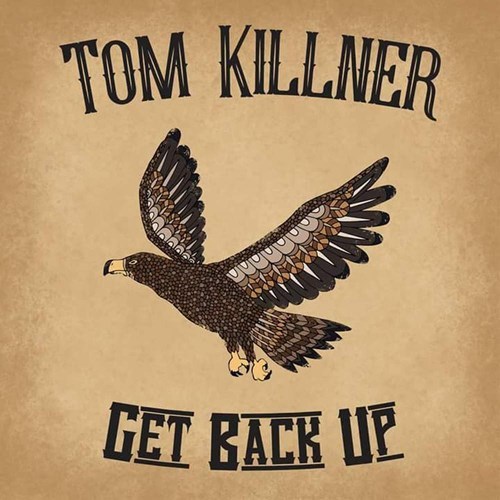 “Get Back Up” just might be a concept record. The opening song, “When Love Comes For You” almost literally crackles with electricity and anticipation – of both the album and the relationship it seems –  as Tom Killner brings the riffs that he’s become famous for, even at the age of 22 and coupled with his band, they make something close to timeless, organ drenched blues perfection.

Ok, “Get Back Up” isn’t a concept record – it is just a really, really good one – but it is worth thinking about the range of musical textures, and the varied feel that those two in isolation exemplify.

“Get Back Up” in many ways is reminiscent of the recent, brilliant, work of Ben Poole. Both are blessed with a naturally soulful voice that, as a result takes the songs to different places than most blues goes, but like Poole, whatever they come from Killner’s songs are shot through with class.

“Groove Shaker” is a little funkier – and I am willing to bet that it is turned into a jam of rare quality when its played live – “Working Man” is a epic, clocking in at around seven minutes. There is a touch of King King circa “Rush Hour” about it too.

Let there be no doubt, though, that Killner is very much is own man, and he is a fabulous guitar player. The title track is a slice of Southern Rock that may well help him as they look to take him to the US next year. The lyrics – like many here, they are a collaboration with Paul Butcher – are stoic, as if to emphasise the maturity throughout.

The drums thunder on “Get Out Of Here” at odds with the gentle ballad, while the brilliant centrepiece of the record, “So Long”, cheerfully evokes everyone from Clapton to Otis Redding. A quite magnificent song, it is enough to convince (if you weren’t already) that Tom Killner is something special.

“Colibri” is a jazzy little instrumental, while “Devil Woman” (I admit, I was secretly hoping for a Cliff Richard cover…..) is a “classic” as it were, blues sounding thing. “You’re the nastiest girl in town….” Drawls Killner, and you’d best believe he sounds up for the challenge. “Don’t Waste My Time”, which follows, is a more rocky thing. Think Jared James Nichols and the like, but the use of soul-filled backing vocals elevates this to somewhere else altogether.

For one so young, Killner has a real weatherworn style. “Be Home Soon” is not quite country, but certainly would pass for Americana. It is the work of an artist who knows no boundaries.

“Get Back Up” was produced by Andy Quinn, who is responsible for the renaissance of Eric Bell over the last couple of years. Bell and Killner are at the opposite ends of their career path, perhaps, but they have two things in common. Passion and talent. When one matches the other the way it does here, it really is a sight to behold. In “Get Back Up” there is one of the most honest records this year and in Tom Killner, a star is surely born.