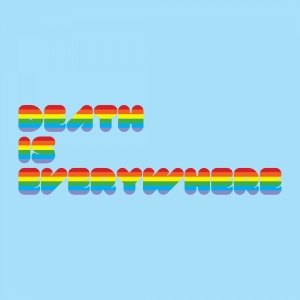 New York City-based multi-instrumentalist Timo Ellis is widely known as the vocalist/frontman for Netherlands, as well as his recordings with countless international mainstream artists. His latest solo EP Death Is Everywhere has him handling all song writing and instrumentation including drums, bass, guitars, vocals, and keyboards. He lives and works in New York City, where he was born and raised. He has appeared on almost one hundred albums in total over the past twenty years and has recorded and toured with such artists as Yoko Ono, Sean Lennon, Joan As Police Woman, and Spacehog.

This four-track extended play opens with `Vampire Rodeo` and has a deep Black Sabbath riff and some pounding drums running through it with some questioning lyrics initially quietly shared before bursting into life. It maybe that they`re both from New York but I felt Timo`s voice when shared had a similar vibe to fellow New Yorker Paul Stanley from Kiss. The track has a wonderfully controlled aggression to it as it pummelled you into submission. A cracker of an introduction.

Title track `Death Is Everywhere` was a really eclectic offering. It seems to flit from stoner doom riffs to a sort of seventies funk “all is well with the world” texture. I loved it as you weren`t quite sure where this fella was gonna take you next. Timo has shared that the song is about how “modern, hyper-individualist, hyper-mediated capitalist life more and more deeply hoodwinks people into confusing nihilism with liberation, and generally how modern post-industrial civilization, contrary to appearances, is functionally a runaway, ecocidal death cult.”

`Evolve Or Die` has some quite tribal drumming, strumming bass and crashing guitar riffs before heading off on a jazzy sort of Weather Report trip out. It veers between the two styles for the rest of the journey with some vocals sang and spoken at times in gaps between the musical interludes. It seemed there was a slight prog rock tinge as well. Wonderfully bizarre.

We close out with `Left Without An Answer` which begins quite dreamy with some softly shared singing before it takes a sort of Led Zeppelin turn then back to wistful hypnosis. Again, it strays in and out of styles while always retaining your full attention. At times Timo`s vocals are a joy to behold and seem to be delightfully multitracked. It`s breath-taking stuff at times.

In the creator`s own words “Basically I would frame this EP as being a clobbering, guttural, yet also introspective, meticulously constructed sludge-pop movie” and I’d find it hard to disagree, but I was really taken aback at the complexity and sheer joy this initiation to Timo Ellis was for me.  I found this a charming introduction for me and can`t wait to check out his back catalogue.