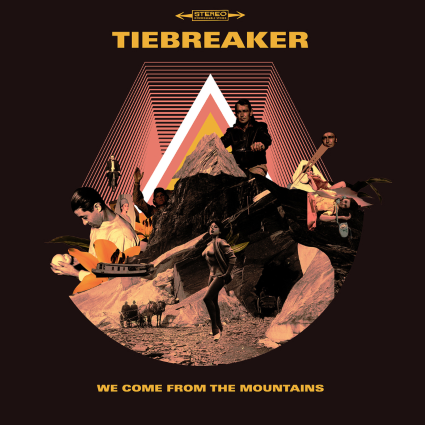 Oh bands, we do love your descriptions. The Facebook page of Norway’s Tiebreaker, for example, says their music is a “semi-progressive, psych-rock n roll explosion.”

No, MVM ain’t got a clue what that means either.

Here’s what we do get: the debut record from this bunch of Odda natives is absolutely brilliant.

Put any of its nine songs on and what you’ll get is essentially a timeless classic. “Homeward” is a two parter and it sounds like something the Allman Brothers might have a go at. It’s warm and cosy, the lyrics talk about fresh bread and apples from the tree, and this is a record that it’s almost impossible not to like.

“…..Mountains” grooves on occasion, “The Getaway” is full of hook and along the way shows Rival Sons how it’s done, and “Where Can Love Go Wrong” sounds like it was recorded 30 years ago – and sounds all the better for it too.

Tiebreaker sounds like it was recorded around a campfire while the sun sets, it’s got the laid back feel of a band that made exactly the record it wanted to, “Trembling Son” might have aggressive lyrics, but Thomas Espeland Karlsen still sounds like he’d rather spend the afternoon in a hammock than fight anyone thanks very much, and the twin guitar of Eirik Wik Haug and Olav Vikingstad sets the whole thing off quite marvellously.

Bookending this brilliant record are the opener “Early Morning Love Affair” and “Walk Away”. The former recalls the The Black Crowes, with the latter being a bluesy slab of something that Monster Truck might have tried.

Perhaps the pick is the urgent bluster of “Nictotine” which just about reins itself in long enough not to become a total freak-out, although it does feature the line – sung with plenty of passion above a harmonica riff – of “I gave up my faith for a cigarette” and no, like that Facebook description we’ve no idea what what they are talking about.

So let’s keep it simple: this will probably be called Retro rock by lazy people desperate to pigeonhole. Neglecting the fact that the phrase “retro” makes rock sound dated, so let’s instead say “classic”. That never goes out of fashion, and believe us, “We Come From Mountains” is a classic in every sense.