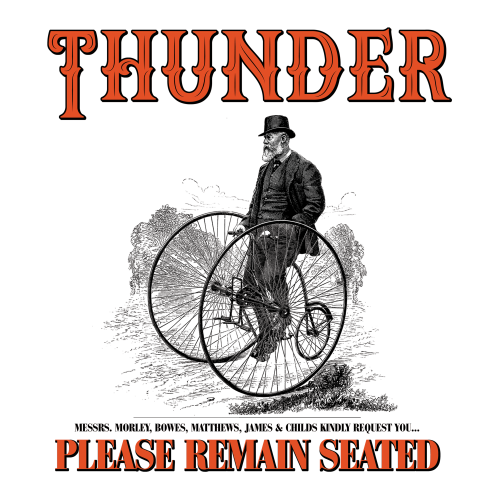 When it was first announced that Thunder were going to make basically an acoustic record you did think “oh ok, that’ll be odd”, but then once you’d got used to the idea, it actually made sense.

Two reasons mainly. First, they’ve always had the ability to write a big old tearjerker of a ballad – crikey at one point their then record company released a compilation of them. Going right back to the first album there was “Love Walked In” for goodness sake. Arguably (along with Poison’s “Every Rose Has It’s Thorn”) the greatest power ballad ever written. So for all the “I Love You More Than Rock N Roll” and “Dirty Love” and the nudge-nudge-wink-wink of “The Devil Made Me Do It” they’ve changed pace better than most.

Then, well, they love a reworking. Not only have singer Danny Bowes and guitarist Ben Matthews done acoustic tours in the past, the full band used to do them on their CD singles (anyone under 25 ask your parents) and at their Christmas shows they do a set full of them. So viewed in that context “Please Remain Seated” is just a natural step.

In the run up to this record coming out there was an interview with Bowes who said the only maxim they worked to here was “work fast, don’t aim for perfection and make it different to the original.”

What it’s not, to be fair to them, is a Best Of. Many of the bigger hits are eschewed for things that actually work. “Bigger Than Both Of Us” never struck me as a country song before, and the piano of Matthews and Tom Oliver is right to the fore, giving this a kind of Faces feel.

“Future Train” has a soulful, almost gospel side and anyone who doubts that Luke Morley is one of the great UK guitarists, best listen right here.

The thought of “don’t make it sound like the original” is probably never better shown than on “Girl’s Going Out Of Her Head” which is lounge jazz and so laid back its almost horizontal. Its very nice, too – if we may paraphrase the Fast Show.

“I’m Dreaming Again” recalls the great and much missed blues of Chris Whiteley, and the swampy, delta feel of “Fly On The Wall” is one that plenty of Americana bands would be proud to call their own.

While many of them explore different ways of presenting themselves, then “Just Another Suicide” sounds like a slowed down version of the original. What it does show, though, is the power of the lyrics and that a great song is a great song however it is presented. The dark and brooding way that “Empty City” is done – with a chug that verges almost on the sultry – shows the creativity here throughout.

It is a wonderful feature of this collection that songs you hadn’t really thought of at the time come to the fore. Exhibit A: “Miracle Man”. To be honest, had I given it much of a thought when I bought “Bang” in 2008? No. Is this sleazy version (with Beth Blade on backing vocals) one of the best things here? Yes.

“Blown Away” likewise has some brilliant slide and sounds a little like The Rolling Stones, and “Loser” which never really sounded mournful before, more like the bloke couldn’t believe the girl of his dreams, sounds positively heartbreaking now.

Highlight amongst all of them though, is probably the Hammond Organ drenched “She’s So Fine”. Righteously funky and absolutely defiant, it is superb.

Finishing with “Low Life In High Places” is bold too, given that it is acoustic mostly anyway, but here it is turned into something special with its piano and brilliant Trumpet work from Jason Mainwaring and the chorus is delivered by a choir and string ensemble as if it was a hymn, before Morley cuts loose as if he’s wanted to all along.

That really, exemplifies why this was always going to work. Thunder aren’t afraid to take chances. Other bands have tried this sort of thing, and its been something that no one but them could enjoy. “Please Remain Seated”, however is the sound of one of the finest bands we have pleasing themselves but also having the skill to take everyone else along for the ride too.

Previous article
BAND OF THE DAY: FORMER WRESTLERS
Next article
ROBIN GETS CLOSER