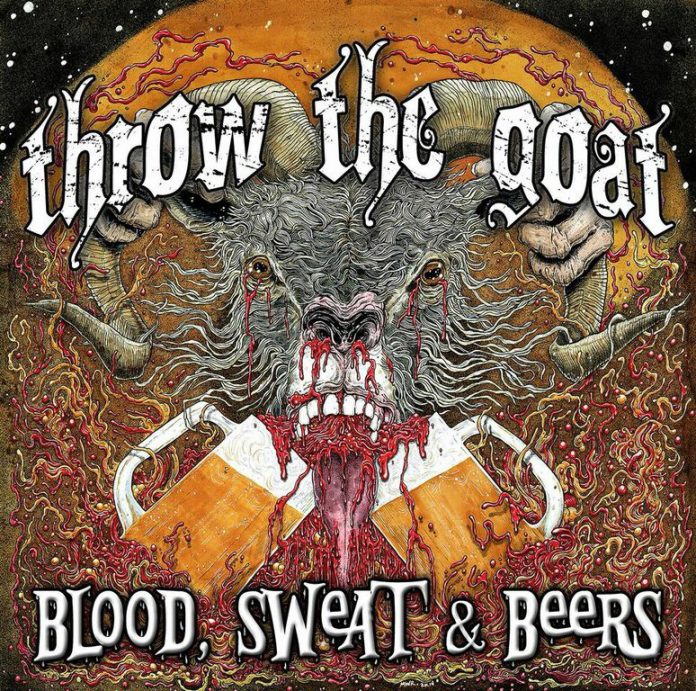 Throw The Goat. Conjures up all sorts of images, doesn’t it? In fact, a couple of years or so ago, MVM assumed when we saw them on the gig listings, that they’d be awful based on the name.

Then we heard their debut “Black Mountain” record.

“Mountain” was full of metal tinged punk’n’roll – imagine AC/DC playing Bad Religion covers with Peter Pan Speedrock and you’d be somewhere close – and their live show at a gig where the crowd was best described as “sparse” bore all the hallmarks of a group of blokes that were over here to play fast and loud and that’s what they were gonna do regardless.

Fast forward to right now and TTG are about to release their second record. Pleasingly, they’ve decided their first was rather good, thanks very much and aren’t reinventing the wheel.

All of which means that the title track kicks us off in the fast lane, getting somewhere very fast indeed – the bar probably – but does so with a clenched fist and guitar solos that wouldn’t be out of place on a Zeke record, “Drown” riffs it’s way all over the place, “Swamp” adds a bassier, almost stoner slam to the thud and the chorus to “All We Have” is like Elvis Costello’s “Pump It Up” on turbocharge….and that’s just the first four songs.

In case it’s not clear, Throw The Goat are one of those bands that view genres as things that constrain other bands. Instead they play what they want to and don’t actually give a toss whether it fits in with some bullshit concept of “feel.” The rest, you sense can sit around the studio debating whether something fits, these boys well, they are done, and ready to play their songs live.

There is a real feel of ebullience to “Idyllwild Eyes” and the short, sharp “Uprooted” that you can’t fake. What is on the record almost sounds like a superb gig. “Eight More Minutes” is eighty four seconds of the type of thrill that used to make up Wildhearts b-sides back in the day and the angry sounding “Waste”  sees band sneer, “do you think I do this shit for free?”

You’d hope not. But then, as they offer up on the last song, “I’m leaving for the only road I’ve ever known” which is good news in itself, because you wouldn’t want them to be anything else. The bottom line here is quite simple: if rock n roll that has a punk ethos and is played at a million miles an hour is your thing, then stupid name or not Throw The Goat should be your new favourite band.