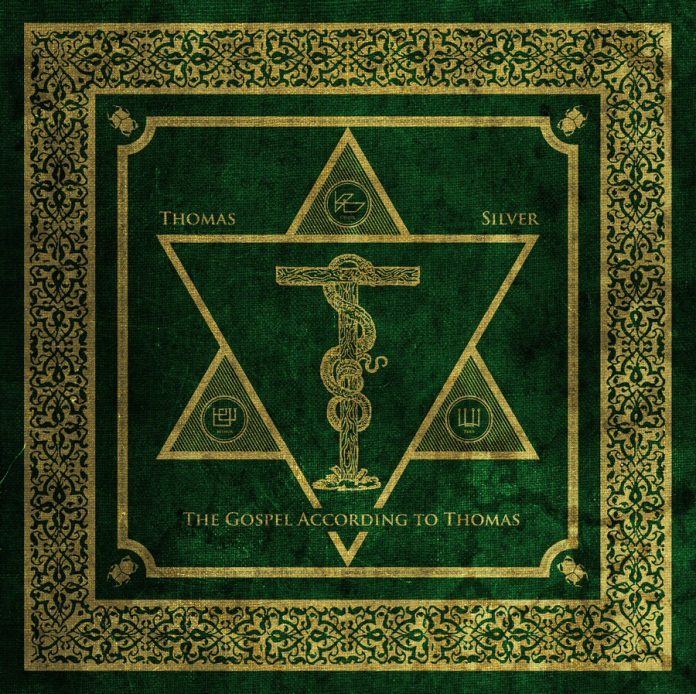 For most of us, being a rock n roll star would be living the dream. It was for Thomas Silver too. That much is clear on the wonderful last song here, “All Those Crazy Dreams”. The Bowie meets Mott The Hoople anthem contains these words: “denim clad, with worn out t-shirts, playing football and dreaming of shiny guitars.”

Yet, those dreams turn sour sometimes: “the years go by, and we’re suddenly grown-ups, with families and kids, houses and German cars.” But then – crucially – he adds, with a touch of sadness, it seems, “you know we’re rock n roll stars…..”

And you’d best believe that Thomas Silver knows what he’s talking about. He was – until 2008 – the guitarist in Hardcore Superstar, when he left, saying he was bored of touring and making music.

A decade is a long time, though, especially when you are creative and gifted. And make no mistake about it, Thomas Silver is both of those things on the evidence of the 11 songs on “The Gospel According To Thomas”.

Now that he’s back, though, Silver isn’t doing quite the glam thing you thought he might given his background. Instead, across the collection, he has plenty to say. So it is that “Caught Between Worlds” has a solo that drips sleaze from every pore, but the rest of it sounds a little like the Backyard Babies jamming with The Cult.

That, pretty much is the vibe through most of it too. “Public Eye” chugs darkly, with some well picked out keyboard too – but all the while with an arena bothering chorus that almost seems effortless and a solo that screeches.

“Minor Swing” has a bit of a boogie, while “D-Day” pulses along on a more HIM style groove and “Coming In, Going Under” knows its way around the odd Michael Monroe solo album here and there.

There really is an impressive array of sounds here. Silver’s voice is deep, and dark and lends itself, perhaps, to a more goth bent, but honestly, “Time Stands Still” is more akin to The Mission than anything he might have done pre-2008.

Not for nothing is there a big old ballad here called “Bury The Past” as that is largely what Silver is looking to do here, but as if to prove he can still party like its 1999 he adds the stunning “On A Night Like This”, which not only mentions “the kids singing Motley Crue”, but also has a guitar line that will be instantly familiar to Cranberries fans……

“Mean Town” is aptly named, and lurks behind a dark bassline with a flick-knife it seems, but as if to prove that nothing was off limits here, “Not Invited” has a 1980s pop flavour.

But it is the aforementioned “…Crazy Dreams” that seems the most important, and as it ends you are left with a sense of a different perspective these days. “The Gospel According To Thomas” might be his new testament, but don’t doubt Thomas Silver. It sets the gold standard and it is a revelation.