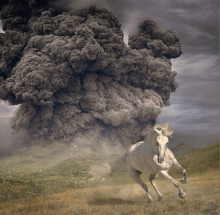 ““My forthcoming album is a sonic and lyrical journey of one lunar year in one man’s life” says Jake Smith. “Four seasons in 12 songs… Loosely based on my twisted truths and adventures.”

Prepare to be amazed, afraid and amused.  In short, prepare for a normal White Buffalo record.

Rewind a decade or so, and I am like everyone else, watching Sons Of Anarchy and get to that song.  When it comes to music, I can’t hear a song as good as that and not investigate. I did, of course I did, and I found an artist (Smith is The White Buffalo) that was unlike any other. To that end, there’s a film to accompany this. No shock, given how cinematic it sounds, but music is my thing, so we’re concerning ourselves with that, and (spoiler alert) “Year Of The Dark Horse” is a work of dark, twisted genius.

Saying the words “I can’t really explain” is a bit redundant in a record review, given that it is literally the point, but it is tough to pin down how Smith/TWB (where one ends and one begins is debateable) do it. The incredible deep, rich voice helps and the fact the band has an almost symbiotic understanding of what to.

Take “Not Today”. The way it builds from the fragile beginning of “one more trip around the sun”, to the roaring “today!” as it builds to a crescendo, is a supreme example of what I mean. All the ingredients of “normality” are there, but the context isn’t like anyone else.

That even extends to the gaps between songs. There aren’t any. And its amazing how much urgency that creates, adding to the confusion of “Winter Act 2”, with its feelings of loneliness. First he asks for his mother before “mother’s much too far away, I’ll have to hold myself this time”. And it’s “maybe I can’t care no more…..” seems like he’s just trying to reassure himself.

“Kingdom For A Fool” has pedal steel at its heart, like a wailing clarion call in the darkness of the “9 to 5 cage” – and the best thing about Smith is he never pretends there’s hope. “this ain’t no breaking news”, he offers. “Life is hard, beautiful and cruel”. This is probably why he became a singer/songwriter rather than a hallmark greetings card poet.

The discordant opening to “Love Will Never Come” is so primal it could be Nick Cave, but “Spring Song” is the yin to its yang. Gorgeous and warm, but just to jolt you out of your reverie and in case you thought the world was on an upswing, along comes the gypsy folk of the Tom Waits flavoured “She Don’t Know That I Lie”. Opening line: “I stumbled out back and threw up in the garden”. From their it gets worse, and the graphic account of what happened after is trademark Smith, where you go “he didn’t just say that did he?” he did. He always does.

Amongst the maelstrom there is some genuinely beautiful stuff. “Come On, Come Up, Come Out” is one of them, and “Love Song #3” is like the other two elsewhere in his catalogue a lovely diversion and he almost sounds happy.

Not for long. But whatever, “Heart Attack” is the best thing here. The catchiest, the funkiest, and if he’s “on a one way ticket to a heart attack” then he accepts that and moreover “I fill my heart with song like a motherfucking maniac” is the most autobiographical line here, I’d wager.

In the context of this album “Am I Still A Child” seems like the comedown. Like the admission that for every head there’s a tail, as it were. “52 Card Pickup” is built around a piano and organ, and it’s a beauty, as is the almost ELO harmonies of “Donna”. “I hope she finds a new guy…..” he sings. Proving beyond all doubt that you can wrap up any lyric in happy tune, I guess.

All of this concludes with “Life Goes On” as the year ends. But unlike Counting Crows on a Long December, say, here there doesn’t appear to be any thought that “maybe this year can be better than the last.” No, in the world of The White Buffalo, they are all the same, all as bleak, as challenging, and with the joy in the odd moment, before you throw up on your shoes again.

And basically, that’s not the album so much as the human condition. But it is what makes this album so good. Even for The White Buffalo this is a challenge, but it’s one of such glorious desolation that its worth the effort.