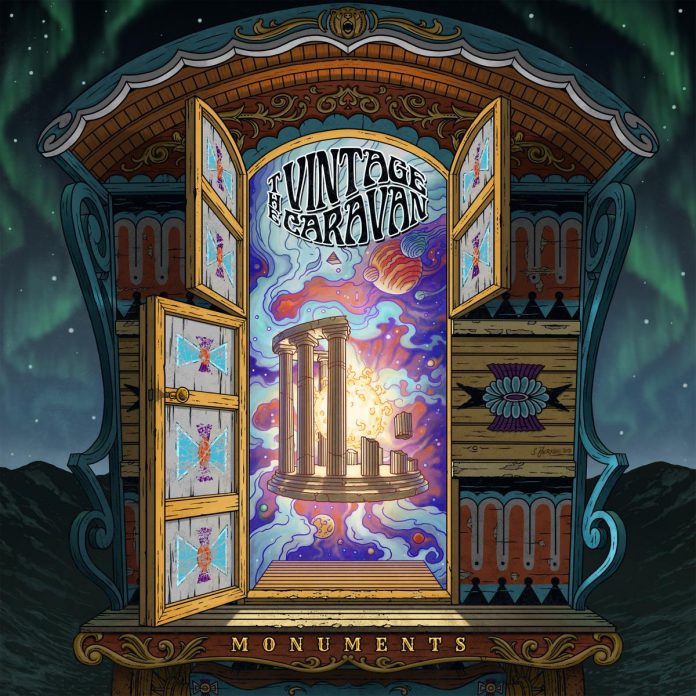 I know time flies and all that – but 2014 shouldn’t be seven years ago. In the November of that year, we all went to some venue in Birmingham that was like a scout hut with Unisex toilets, because Blues Pills were playing.

The opening band that night was about the least likely looking rock band on Planet Earth. Three fellas who looked like they were about 12 and were wearing cardigans, proceeded to not just give notice of their talents, but almost demand you liked them.

Vintage Caravan – for it was they – haven’t messed about. “Monuments” is their fifth record. They’ve also moved label, and with all due respect to 2018’s “Gateways” (not a bad record by any means) they’ve moved back to what they were brilliant at. And more to the point, they’ve refined it and made what is perhaps the best album  of their careers.

It starts like a disorienting whirlwind, before “Whispers” settles into one of their trademark grooves. More than that, though, it has a greater melody, and – for want of a better phrase – a greater confidence. “This is how it’s gonna be, cos I love how it makes me feel” sings Óskar Logi Ágústsson. Now, he’s not singing about the band, but he might as well be. The gleeful “yeah!” straight after the solo has exploded, tells you that this is a band who is right at the top of the game.

There’s a power about them this time. “Crystalised” underlines it, not to mention there’s an acoustic strum over the top. Nothing was off limits this time. There’s a Rival Sons type riff here, but just as crucially there’s a Gov’t Mule jam there. Drum solos, guitar solos. And the lyrics are seemingly pulled from the rugged Icelandic beauty.

Drummer Stefán Ari Stefánsson is to the fore throughout, laying the bedrock here for some incredible stuff, but never more than “Can’t Get You Off My Mind” and the melting pot of influences around is never better shown than on “Dark Times” which veers from folk to metal in the space of about three seconds.

There’s even a ballad of genuine tenderness. “This One’s For You” is as gentle as can be, and seems to come from deep. This is balanced out by the pulse of “Forgotten”. The heaviest thing on the record, the longest and most ambitious. In many ways, it is the central pillar around which this is all built.

The most impressive thing about The Vintage Caravan is that for all the fact that they know you know their influences (Zeppelin, Deep Purple, a touch of Sabbath and Free) they are content to do it their own way, with more than a slice of modern thinking. “Sharp Teeth” is underpinned by some crunchy, discordant riffing, while “Hell” marches off down some markedly UFO type roads as if to change tack again.

Regular readers will know that I love a three piece. They just sound so balanced and right somehow. The power that TVC generate on “Torn In Two” proves that, but oddly, if you want to understand what this album means to the people that made it, then I’d argue you need look no further than the “whoop!” at the start of “Said And Done”. This is a fun album. Fun for the band, and you’d best believe fun for those that listen to it.

And is if to underline one more time they’ve achieved their ambitions for it, then “Clarity”, wanders, and meanders for eight wonderful minutes, floating exactly where it deserves to go.

As a fan of The Vintage Caravan for seven years or so, I’ve been long convinced they had a classic album in them. It’s here – and even better, these songs might not even end up being their defining “Monuments”, as it were.