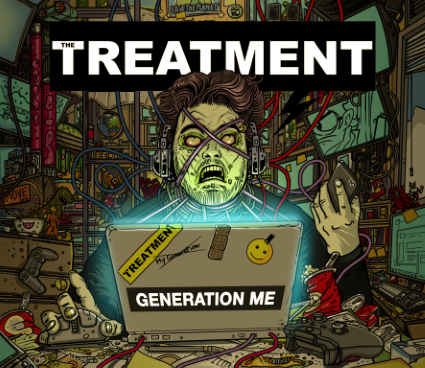 The make or break third album?

What do you do when you are no longer the hotly tipped new kids on the block? That’s a question that The Treatment are no doubt wrestling to answer on album number three. They’ve certainly paid their dues, from free gigs under the banner of Classic Rock on their first tour, to opening for everyone from Status Quo to Thin Lizzy, they’ve done it and they’ve impressed people – and if their live shows have perhaps been better than the two records so far (not counting the debut getting re-released with a couple of new tracks) that doesn’t mean the records haven’t been thoroughly enjoyable.

For this – on new label Frontiers, also home to the likes of Whitesnake – there’s been some changes. There’s a new singer in Mitchel Emms and new guitarist Tao Grey. The new line-up roared around the country alongside WASP last year and watching them, there did seem to a real sense that this time it was serious, that if it wasn’t quite make or break now it wasn’t far off.

And some four months or so later, that steely determination is all over “Generation Me”. It’s not like The Treatment have changed sound – there’s mercifully none of the growling that a lot of modern bands think they need to prove they are heavy – but there does seem to be a touch more spite on the riffs, and a little more of a devil may care attitude.

It’s not that “Generation Me” is a different side to the band either. It’s more that instead of being slightly timid and wanting to be invited to the party and hoping for the pretty girls, on this there is the confidence and swagger of a band that will gatecrash your gaff, and then leave with your girlfriend after drinking it dry.

With British Rock veteran Laurie Mansworth (who was involved in the early days of The Treatment’s obvious contemporaries, Heaven’s Basement, as well as being father to the drummer here, Dhani) and Iron Maiden’s sound man – and sometime Voodoo Six bass player – Tony Newton at the helm, there is all the pedigree in the world. All that’s needed is the songs to match, and my how The Treatment have delivered on that front this time.

Opener “Let It Begin” – and the same is true of most of the album – is built around a pounding, driving Airbourne-esque riff as Emms adds an aggression to things. “The Devil” is simple tale of doing naughty things with bad girls but it’s is brilliantly done, while “Tell Us The Truth” channels the punk spirit of early Motley Crue and is pretty pleased with itself.

With the first three done, there’s always the question of whether the quality can be maintained. Happily here, the answer is most certainly. The title track is arguably the best thing here, with its real anger and middle finger in the air attitude and “Cry Tough” barely conceals the idea that it quite likes AC/DC and can’t understand why they aren’t in stadiums themselves.

“We Are Beautiful” continues down the same road, and seems set to become their new anthem, the words “I won’t be denied” are positively spat out here, but that’s nothing compared to the ire reserved for whoever the subject of “Bloodsucker” is, and the band have never written lines like “I’m gonna hunt you fella until the day you die” before – mind you they’ve never written riffs this good either.

By the time that “Light The Sun” has raced off to the nearest horizon looking for trouble, you are left with but one conclusion: this is a new and improved version of what was always a very promising band. Rock’s most precocious young talent has grown up pretty spectacularly.