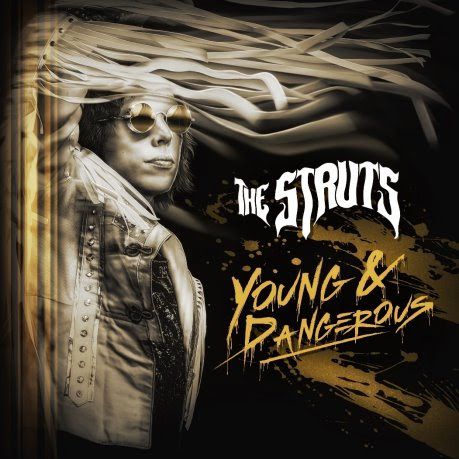 10 words, right at the start of “Primadonna Like Me”, which essentially explain why The Struts rule.

First of all, the song is ace. Just glorious, totally without self-consciousness, sounding like some mash up of Mott The Hoople playing The Dandy Wahols and is basically everything rock n roll should have been right from the second Elvis marched into Sun Studios to sing a song for his mum.

But its more. It’s what those words mean.

I’ve got this bugbear about local bands that play the same venues for years and years and simultaneously blame everyone else for no one giving a shit. The point is, The Struts represent a different way.

“Hey you, don’t you know who I think I am….?” Is what Luke Spiller might have said a few years ago, but now, he can swagger about Derby (and you just know that he does, so he should too) with the knowledge that The Struts have supported The Who, The Stones and The Foo Fighters, filmed videos in Caesar’s Palace (and Alice Cooper is on it) and this might not be politically correct in this modern era….lets not be coy about this lads…. one of them – guitarist Jed – is going out with one of Little Mix, so yeah, well done.

Subtext: take that, all pub bands.

The record begins and ends with versions of “Body Talks” – one of them is a duet with Keysha (I had to Google who this was, in truth) – but both of them scream “hit single” at the top of their voice.

Big, stomping and shiny, this is pop rock and its unashamed. It’s also a damn site more exciting than the likes of Daughtry. And if you think that pop is something to chastise someone for then think on this: it means “popular” and, oh The Struts do not give. A. Shit.

“In Love With The Camera” which sounds like a song from school discos in the 1980s (so much so I felt like trying to get off with Dawn Hughes all over again) but if you want a more modern reference, then all I got for you is if The Darkness really let themselves go.

“Bulletproof Baby” is going to sound ace when The Struts are in arenas (and christ, they’re gonna be – and not as the support either) and 10,000 kids have their fists in the air, and don’t make the mistake of thinking there’s any self-doubt in the title of “Who Am I” – this isn’t a band with any worries. It does sound like Prince is getting funky, though.

For all their success in the US, this is a British band with a British heart. Indeed, only one name kept coming into my head throughout “Young And Dangerous”. That of Queen. Now, this presents a problem, because as a kid the only tape we ever had in the car was Queen’s Greatest Hits Volume 1, and as a result me and my younger brother always had a massive antipathy towards Freddie and the boys. But you know what? They had some belters. 35 years on I still know those tunes, and a new generation are going to feel like that about the likes of “People” whether you like it or not.

“Fire Part 1” and its follow up “Ashes Part 2” are examples of the incredible ambition here, “Somebody New” is a piano based ballad, with hints of The Beatles, and its all very well, but they’re better suited to the likes of “Tatler Magazine”. On this one, Spiller does his best Mercury and the chorus is so OTT as much as you – as a cynical bloke in your 40s – want to hate it, you can’t. You can only admire a verse that goes: “I’ll fly privately/bon voyage economy/first world fantasy/no need to wake before 3” admit it. You wish you’d thought of it.

“I Do It So Well” is like they’re reminding themselves to be rock stars, “Freak Like You” on the other hand,  is better because it’s message is one of empowerment, like they’re reminding everyone they can do it too (ok, I am unlikely to be going out with any of Little Mix or supporting The Stones, but crikey, by the time that sax solo hits you do think you can take over the world).

Speaking of taking over the world….say hello to The Struts. The next crossover stars, and if you think rock n roll excess is dead, then watch a load of blokes from the East Midlands breathe life into its corpse.