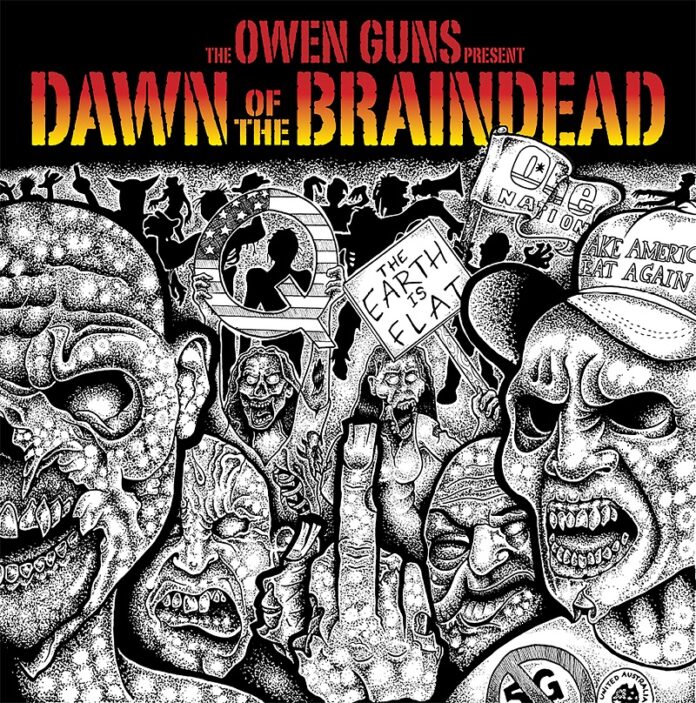 Back in 2020 I got sent an EP from an Aussie punk band. I finished the review by saying: “I hope it offends someone, because they are exactly the type of person who deserves to be offended by it.”

The same band sent me an EP in 2021 too. On that one I wrote: “Look you’ll either love this or hate it and I suspect The Owen Guns couldn’t care less either way. You don’t make this if you do.”

And now, The Owen Guns are back, mate. And their frontman (let’s be honest you can’t call him a singer in all good conscience) Sean “The Bastard” St. Leone, sent me an email that said “you might like this, you might not. Do what you like, I’m not your mother.”

Now, my mother has been dead for almost 14 years, but I can categorically state mum wouldn’t have been a fan. Never once (and I mean this literally) did I hear mum swear.

She probably wouldn’t have approved of her eldest son walking around the office at his work singing the chorus to “Not You Too”. It goes like this: “Bono, Bono, you’re a c**t”. And it proceeds to explain why he is. “You flew your hat first class”, for one.

That is, basically, what The Owen Guns do – they do it with a kazoo and a whistle and it’s catchy as something you’d get from some £20 quid an hour escort you’d found on Viva Street, though – they write angry, scrappy punk that you can’t get out of your head.

“Arson About” is furious about people not paying tax, not sure who, don’t really care. It accuses them of “touching kids” mind. There’s a vignette about bees (I hate wasps, the bastards, do a song about them….) then there’s the quite stunning “Adventures Of Captain Yellowtooth In The Temple Of The Dumb”. It thunders into conspiracy theorists. “Weapons Grade cockheads”, apparently. I used to work with one of these dicks. I have had cerebral palsy since birth and he asked if I’d tried a breathing technique that would cure it…..

“Pulling On The Boots (Racist Dickhead)” does the job in the title, and “C.S.M.F” is as happy as that shite “Don’t Worry, Be Happy” but puts a different….urmmm spin, on it. They even go prog on us for “Who Stole The Water”, well its three and a half minutes long and that…..

But it does shine a light on the fact that these boys are better than they probably get credit for. Proper hardcore shizzle this, up there with any Cro-Mags or Agnostic Front thing going, but they never had “I Only Love You For Your Brains” or “Drunk Shirtless Guy” – another that wages war on dickheads.  And if TOG have a mission statement I am wagering it’s that.

“Fuck What You Think You’ve Heard” goes out to that mate we’ve all got that forwards on any rumour he finds on Twitter, if you’d been in our cricket WhatsApp group you’d share the anger….. “It’s Too Late” is so cheesed off it’s going to explode, and frankly, if these boys ever get to England to play I want to watch them do this just to see Sean go purple. And that’s before “It’s Not A Riot” thunders about for 57 seconds of righteous indignation.

Look, everything I’ve said about The Owen Guns in the intro applies here. You’ll love “Dawn Of The Braindead”, or you’ll hate it. It’ll be the best album of the year or the worst. But I’ll say this: when The Chats come over for the mega tour they’re playing next year, they’d best bring these lads as support or I’ll fight them myself.