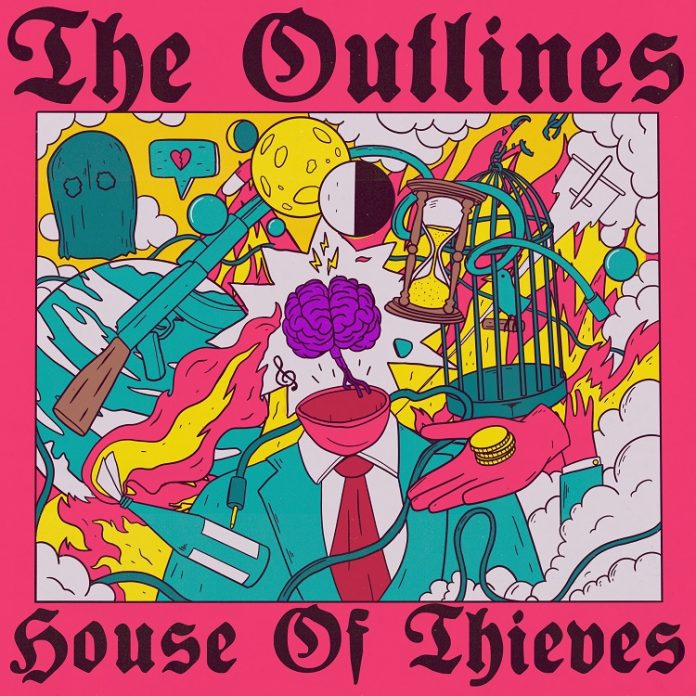 “You feel that?” Sneers Kyle Peters on the opening song here, “Man Down”,  “…..weighing down the flag you wave……ladies and gentlemen, welcome to your fucking grave……!”

Peters was in Ferocious Dog from 2010 to 2014, and he formed The Outlines soon after. Along the way they’ve released an album or two, and an EP.

This ten minute three tracker is the follow up to last years “Day Dreaming” and it is surprising how modern the punk contained here is.

The whole thing is anchored down by Martin Brown’s bass, but the opener and “Mind Trip” –the standout moment –  as well as being resolutely punk has plenty of moments that recall The Libertines, and others that you wouldn’t expect.

Rather like the new Green Day album, it gets in and out with the emphasis on speed, and even if there is a real heavy edge to the title track, then there is a melody too.

And a bleakness. This is the work of a three – drummer Dean Hill completes the band – that have the small town frustration of the likes of Virginmary’s and seem to understand that there is no light at the end of any tunnels.

Not here. Not anywhere.

A scrappy, fuzzy little ball of rage, “House Of Thieves” will not and proudly so, fit into any of your boxes. Nor does it sound like Ferocious Dog. Put it this way, there is nothing slow motion here, instead it seems to pass by in a sugar coated, yet somehow bitter, blur.

A look at some of the bands they’ve toured with rather helps explains it. Punk grandees like Buzzcocks, The Boomtown Rats, newer acts like Fizzy Blood, yet also indie Premier Leaguers Space. They’d have fitted in everywhere, because The Outlines are outsiders. On “House Of Thieves”, though, they haven’t stolen anyone’s sound, more just taken whatever they wanted and made it their own.