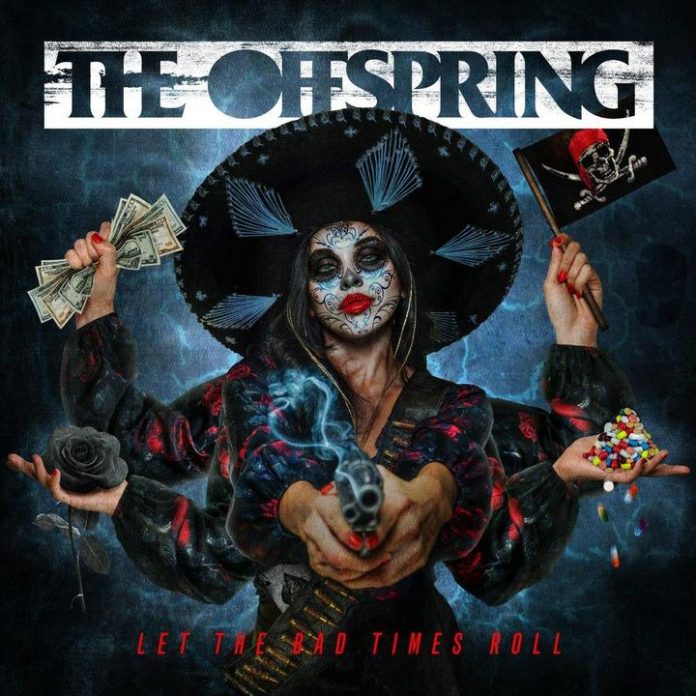 I have only looked at the charts about twice in the last 20 years. Both were Wildhearts related, to see where their new album or frontman’s Ginger album had got on.

But January 1999? Well that was different. Three of my favourites were in the top 10. Three Colours Red’s “Beautiful Day” was about number nine, “Tequila” by Terrorvision was number 2 (I can say that with certainty, because I know what kept it off the top) and number one was “Pretty Fly (For A White Guy). The Offspring’s anthem that just about everyone liked.

This would now be absurd, but back then, how we strutted about, proclaiming rock was taking over. And the even better thing was that The Offspring being ace led me (as it so often does) on a journey to find loads more punk that sounded like them.

Which is why I greeted this album – the first they’ve stuck out for nine years – with such a smile. And, just like meeting family members again for the first time for a year because of Covid, “Let The Bad Times Roll” is there to give you a hearty hug back.

Forget the lawsuits, the discussion and the rancour, it takes about five seconds of “This Is Not Utopia” to remind everyone that the boys are back in town.

Lyrically, there’s more anger, perhaps – and given that this was written over the last few years, that’s understandable, even commendable – and when Dexter Holland finishes this with “how long must we wait, till love conquers hate?” he is speaking from the heart.

Don’t get me wrong, though, this is not a Billy Bragg record. The title track might dismantle Trumpism, but you can still jump around like a two year old on a trampoline if you want.

“Beyond Your Walls” is as catchy as you can imagine. The cowbell alone ensures that, and the chopping bass on “Army Of One” is a way to welcome Todd Morse to the fold (he was the four stinger in Juliette And The Licks), he slots in seamlessly, in truth.

“Breaking These Bones” thunders along in a kind of sunkissed Motorhead way, but in truth, all these sound like Offspring and no one else. Holland has that voice, Noodles tosses out the licks with something approaching glee but moreover, they just have an innate ability to write punk rock (or maybe that should be rock songs infused with punk) in an arena filling way.

In the middle of the record there’s a pair that change direction. “Coming For You” is glorious. Like a testosterone fuelled Sweet, a stomping glam rocker from the top draw, while “We Never Have Sex Anymore” is filled with jazz (mags?) and horns (the horn?) but it’s tongue in cheek and wonderfully conceived (puns intended). Or what happens when you don’t give it to me baby, you might say.

“The Opioid Diaries” rolls back the years to the early days and “Hasan Chop” basically likes the idea so much it does it again, adding a fabulous slice of melody over the top.

For grins and nothing more, the album finishes with “Gone Away” – a re-recorded version that turns it into Elton John jamming Mad World with Tears For Fears, while “Lullaby” is a psychedelic version of the title track. You imagine that this will be playing as people file out of the arena after the live shows – and you imagine people will need a breather too.

When a huge band returns after so long away, it can go two ways. It can – and often does – tarnish the legacy. Or, in the case of “Let The Bad Times Roll” you could just casually make one of the finest albums of your career.