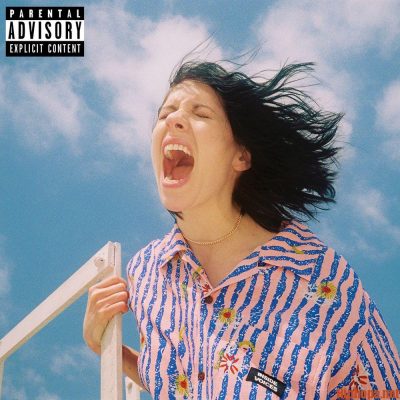 Regular readers will know that I love the ways that music gets described. My favourite two are still “post blackened hardcore” and “easycore” (like anyone knows what that means!) So when “Inside Voices” turned up with the words that K Flay was an “Alt-Rapper” your humble scribe did have to smile.

That all being said, you can see the problem with K. She’s fabulous – two time Grammy nominated no less – but she’s entirely original and people like to put things in boxes. And its not so much that she doesn’t fit in them, more that if you tried to put her in one, she’d smash the thing to pieces.

This five tracker in her own words is: “the things in your head that you don’t normally say out loud. The thoughts bouncing around your brain like pinballs, swimming like sharks, swirling like thunderstorms, knocking like fists. You feel the pressure building, the tension mounting. It’s like a kettle about to blow.”

Which means bluntly, that even for Flay this is raw – and anything but easy listening.

The guitar heavy “Four Letter Words” starts with the thought: “I drank a litre of tequila in my bedroom, its taking all of my power not to text you” and that sets the tone. You feel like you are reading the diaries of K Flay (or are listening to her confessional, take your pick).

As if to put a spanner in the works of this “alt-rap” thing, “Good Girl”(written with Imagine Dragons Dan Reynolds)  has a thumping, driving indie energy that has more in common with the likes of The Strokes, while “Dating My Dead” is arguably the highlight.

It’s the funkiest, the rawest and there’s a moment when the pop hook hits where even for this record you go “she didn’t just say that did she?” She does.

Blink 182’s Travis Barker is on that one, but even he plays second fiddle to Tom Morello, after all. Morello rages against everything on “TGIF”, which possesses not only a beat down heavier than it has a right to be, but also a solo that only he can play.

“My Name Isn’t Katherine” begins with the words: “your mind is created by your name”, and then takes you on a journey into some dark places and seems to be spoken in a kind of stream of consciousness type way.

The inference is clear, though. K-Flay is more than a character that Kristine Meredith Flaherty plays. K Flay is the reason, or one of them, that “the sad kids become the Brad Pitt’s” as she neatly puts it. “Inside Voices” is a challenging, sometimes nasty journey to empowerment, (albeit one that deals with “adult themes” as the film adverts on Sky always say) and never mind whispering it quietly, it needs shouting about loud.