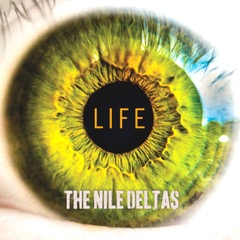 There’s a picture knocking around of The Nile Deltas in the studio – I assume having completed the recording of “Life”- and the looks on their beaming faces say it all. Smiles with a joy you cannot fake.

The only inference you can draw from this is that they are thoroughly pleased with “Life” – and maybe life in general.

Well they might be too, because the five songs here are absolute crackers.

If you asked even the band themselves, I am fairly certain that they’d admit they are not at the cutting edge of anything new. Not everything needs to re-invent the wheel, and you know what? The wheel works just fine.

The pre-chorus on lead cut “Don’t Play With Me” lays their ideas bare: ‘Cause I, well I can’t read your mind now baby/You may be giving me the signals loud and clear/Maybe it’s because I’m just an old fashioned man, I need to hear …” This is, to be sure, a male orientated sound, and its one that looks back for inspiration.

That track is about “male clumsiness in the dating game” (not something I would know much about seeing as I’d actually need to get a date first……!) what really matters here is that the vocals of Craig Blencowe are phenomenal, Nige Thompson and Tom Lord kick out the double riffs just fine, but crucial to this one and the others is the brilliant keyboards of Giles Minkley. The thing is drenched in Hammond and it takes us straight into a Free type area, where its happy to wander from as a base.

“Lying Eyes” (possibly about the same girl who was playing with them, who knows?) is more of the same, but slower and more soul-filled, while the bluesy “Dust Me Down” absolutely stomps, it really does. Essentially it’s like this, if an Englishman fronted Blackberry Smoke then here’s the results.

“A Little Soul” actually namechecks some soul artists. The band aren’t hiding here that this isn’t your conventional hard rock track, it floats, it has a warmth, and anyone who bought any of the Black Crowes records after “Southern Harmony…..” will recognise the vibe.

The closing title track sounds content with its lot, and although it is the depth of the winter outside, it doesn’t half make you long for the summer sun and a festival somewhere.

And when you see The Nile Deltas at one this year, stop by the tent and watch them, because you won’t be disappointed. The sound of six blokes making the music they really wanted to. Life doesn’t get better, does it?