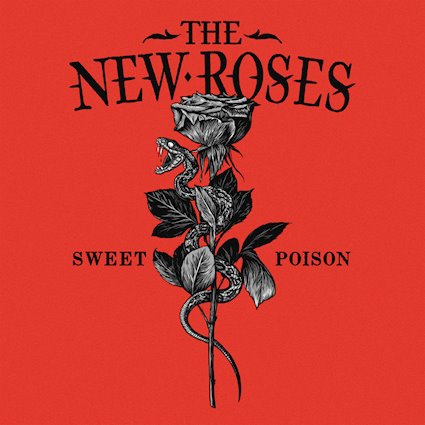 Back in 2017 me and my best mate happened to be in a pub in Nottingham with The New Roses. They were playing it later that night and back then I was doing interviews on the site.

Mention of my mate is important, given that we’ve been friends for 40 years and our bond is strengthened by music. As we tried to talk to The New Roses, it became increasingly clear that this love bound them, and us, together too. I don’t speak German, most of them didn’t speak English too well, but we loved the same bands. Sometimes that’s enough.

The irony that the boozer that acted as our venue for the evening was within a literal stone’s throw of the Nottingham Arena wasn’t lost on me, or I suspect them either. That’s their sound. In fact, if you got together the sounds of The New Roses, the 80s rock, the country influence, the touch of punk, then frankly they are closest to rounding up my tastes of any modern band.

For this, their fifth record, The New Roses have pulled out all the stops. Buoyed by the confidence of playing with Kiss in their native Germany, “Sweet Poison” starts like the preening strutting rocker that it is. “My Kinda Crazy” reckons they’ll “kick in the door” and features a solo from Dizzy Daniels that screams “Guitar Hero”. If he’s not got a fan on him to have his long hair blowing in the breeze as it’s playing, then I don’t know rock n roll anymore.

The New Roses do. “I never thought I’d turn 28” offers Rough. The 27 club didn’t need any more members, mind you. “Playing With Fire” is as good as it gets. The mission statement of the band: I am not playing with fire, I’ll just burn the whole thing down. Sorted.

Those country fantasies are fulfilled too, with “All I Ever Needed.” Kinda. Because there’s a name you can’t avoid with TNR. Bon Jovi. Ok, they aren’t Jovi anymore since Sambora left them, and they’ve barely made a decent record in 25 years, but back in 1988 they were my boys. I suspect Rough’s boys too. This wouldn’t have been out of place on “New Jersey” – and I can pay it no higher compliment.

The thing about any review of TNR is that you have to try and get the reader to understand the sheer joy that’s in the music. I am not pretentious enough to think I can do that, so instead listen to “Usual Suspects”. I know this is an odd stance for a review, but from the second it starts – with a guitar solo, naturally – it’s a celebration. Of rock n roll, of life, of this band. The same applies to the standout “Warpaint” and Buckcherry have had number ones with way less.

They get the blues out again for “Dead Of Night”. And if you’re not thinking “Black Stone Cherry” as the hook hits, then you’re a better man than me. The acoustics stay out for “True Love”, and that’s fine. They’ll probably use it for a stripped down section in their live shows. For my money, though, they are better when they are effectively giving the 80s a modern twist, as they do on “1st Time for Everything”. Sort of AOR. Sort of brilliant. FM are looking on enviously thinking they’d got the market for this cornered.

“Sweet Gloria” is another of the things they do so well. If you’re looking up at stars then you can always dream, and this is that. I’ll be honest, I’d like to meet her. Can we do that, lads? And if there’s a serious point here. The idea that only you can change you is it. “The Lion In You” offers a light in the darkness for some. Rock n roll can do that for you. This record can do that for you.

All of this ends with a massive sounding ballad. “The Veins Of This Town” is brimming with intent, and its got the skill to pull it off. It’s harmonies alone scream that they are thinking huge.

The New Roses should be just that. Yet they remain largely unheralded in the UK. “Sweet Poison” simply must change that. Even if it doesn’t, then its still nothin’ but a good time…….