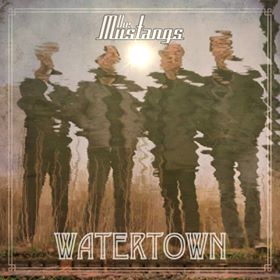 As much as I try to find a different angle for these reviews, sometimes you have to admit defeat and start with the most obvious.

The Mustangs drummer is Jon Bartley. For the non-politically minded, he is the co-leader of The Green Party. That wouldn’t usually be that important with their stuff – and to my shame, I had owned a couple of their records in the past without realising – and they have long been one of the finest blues bands around the circuit.

But Jon’s presence is crucial here. He tells you why himself: “This new album feels very fulfilling for me.  It’s the first time that we’ve gone out with a record that has a message that aligns with what I do politically.  I loved playing on it because it’s got some great tunes and lovely performances by the rest of the band, but there’s an extra dimension due to the themes and the story.”

He is spot on too. On all fronts.

“Watertown” is concept record. Singer Adam Norsworthy – an award winner in his own solo right – explains it thus: “[it] is about the conflict between unchanging nature and the all-consuming march of city and industry,” he says: “told through the eyes of a young couple.”

And ok, usually, as I have said before on this site, when it comes to concept records, I admit I glaze over like some ill-educated philistine and inwardly go: “yeah alright mate, lovely. Are the songs any good?”

I did that here for a bit – until it became clear that not only were the songs phenomenal, the story informed them.

Here’s the last bit of the puzzle. “Watertown” is produced by Wayne Proctor. Ex-King King drummer he might be, but is track record in the studio is better than most. You’d best believe whatever he’s sprinkled over this has turned to gold.

Not that this is a blues album, as such. The Mustangs have – probably due to the themes here – moved into more folky areas, there’s even some warm psychedelics about “Inter Machine” for example, but hopefully there’s enough here to keep their old fans on board.

They certainly will enjoy the journey if they like good music of any sort, really, because that’s what “Watertown” has, in buckets.

Beginning with birdsong on the beautiful “King Of The Green Fields” evokes the idea that this time the pace is slower, and the gorgeous, lilting acoustic tinges mix with Derek Kingaby’s blues harp.

“Field And Factory” is even better. Rumbling drums appear to indicate the coming of a storm, and the first line “everything that you can see, from the ocean to the lemon tree, belongs to you, belongs to me” resonates with me like the time as a boy I heard Billy Bragg sing “The World Turned Upside Down” as a small boy and thought about the lyrics.

If that belief has been with me ever since, then a love of music has never left either. The funky “An Easy Place” recalls Wile And The Bandits, and in fairness this melding of folk and blues makes them an easy reference point, I suppose.

“Love Will Pass You By” has a tinge of Ben Poole’s – another artist to work with Proctor – more soul-filled moments about it, before the stomping country folk of the wonderfully simple love song “Going Into Town” adds a real sense of blue collar stoicism. “its my baby’s night tonight…..she still believes a time will come when we get lucky”, but it is delivered with a real smile, a desire to make the best of things, perhaps.

A feature of this, is the different shades it manages to find. “Kings Of Light” which moves the story into the industrial age, “now we’re carving up the green belt, it can’t really do much harm” is somewhat chilling as a line, but the song itself has a real strident groove that many here do not.

The best, though, is saved for the title track. The confusion of the modern age, the environmental battle if you like, is laid bare: “everybody’s talking about a new power coming, everybody says its going to make us rich” is then followed up with “I ain’t afraid of progress, but I don’t like change…..”. As for the track itself, on my notes, aside from those two lines, all I wrote was “Tom Petty” and that, maybe is an indication that this is as good as songwriting gets.

It is a mark maybe, of this band that they can follow this up with “She Didn’t Get Into The Water” which has an angular guitar line reminiscent of the Lightning Seeds, and then the quite wonderful “Swimming With The Devil” which has more than a touch of Ian Hunter about it.

A brilliant collection – one of the finest you will hear this year – ends with “Look For Old England” and I’ll be honest here. So “classic” does it feel that I actually googled it to see if it was a Faces song I didn’t know. It isn’t. But think on this. In the first verse. Adam Norsworthy sings the line that holds the key to all of this: “I know you’re looking for some answers. Asking what its all about. You never chose to join the rat race, nobody ever showed you how.”

And they didn’t did they? The Mustangs haven’t got the answers either, by the way – well, their drummer might have more of an influence than many, I guess? But whether you buy into the story or not, just buy “Watertown” because it’s utterly magnificent.