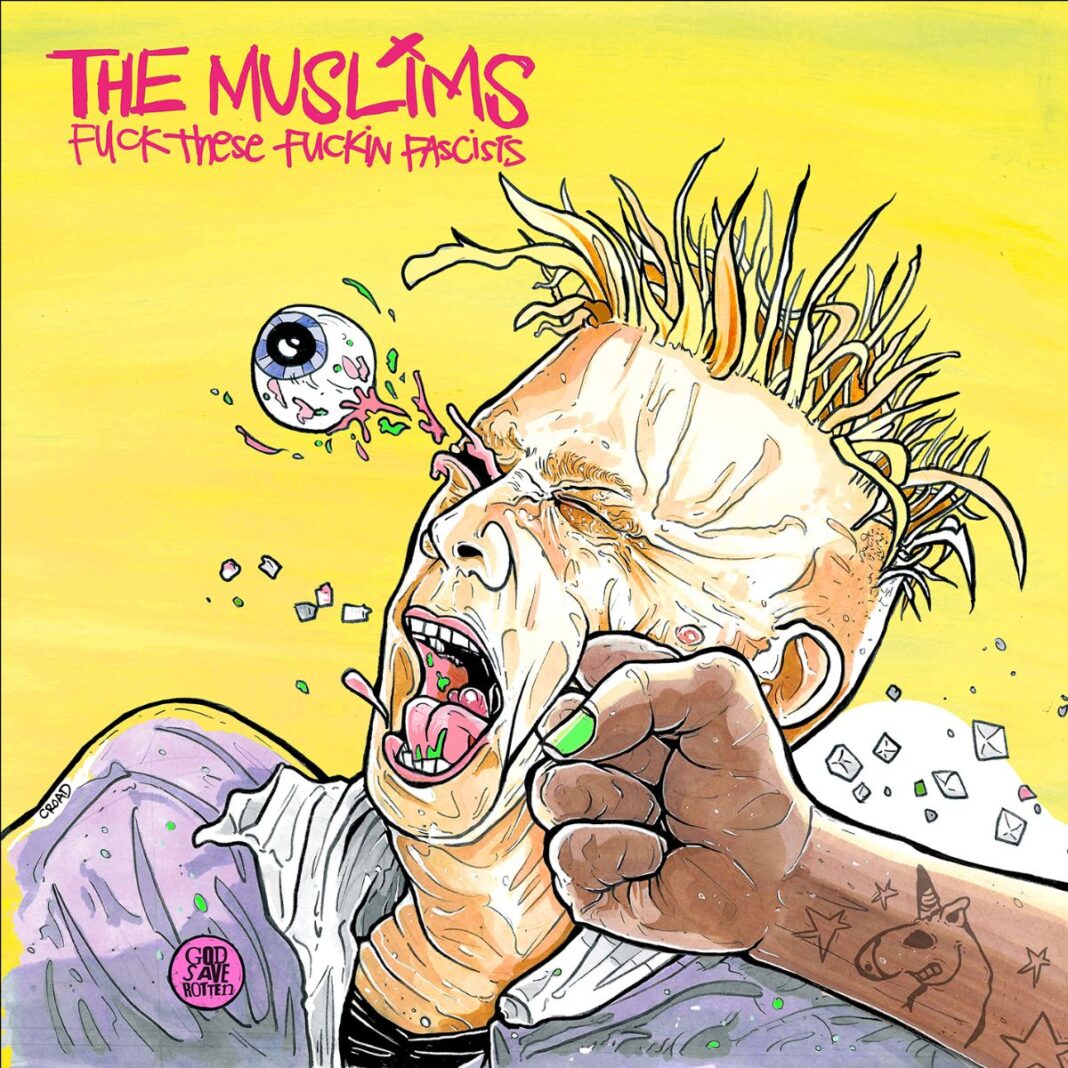 “Fuck These Fuckin’ Fascists” is out digitally for a month (physical release is in November) so to listen to the record I went to Spotify.

Ten of the songs here (and yeah, I am using the word “song” in its loosest sense) have the E for explicit sign. One of the pair that doesn’t is the last one. It’s title? “John McCain’s Ghost Sneaks Into The White House And Tea Bags The President”. At two minutes 11 seconds it’s the second longest one here, and not only are McCain’s balls on Biden’s face, it sums up The Muslims.

It’s all over the place, and this is a scattergun album. There’s folk, there’s punk, there’s lyrics that inform/educate/outrage (depending on your point of view) and more to the point, if you share a world view it is brave and brilliant.

“Hands Up, Don’t Shoot” puts you in the streets with people of colour, and whilst I can’t empathise, I can share the rage. “Crotch Pop A Cop”, makes the anger clear – but the sounds here, part power pop, part garage rock and absolutely sneering punk from ’77 – mark these apart.

Not that they need to be actually. The Muslims have always been proud outsiders.  QADR (vocals/guitar), is the self proclaimed “Bad Muslim” while  Abu Shea (bass), and Ba7ba7 (drums) help her kick out the …well not jams, that’s for sure.

“Liberty” couldn’t be a fiercer condemnation of what exactly the idea of liberty means. “Illegals” is a genuinely brilliant song. The punk song of the year, probably. “No one’s illegal but white people” is a hell of a hook – and as a white man in my mid 40s I probably shouldn’t sing along, but try and resist it, go on.

“Kill Your Masters” whips up a frenzy, the title track actually adds a kind of blue collar thing and as much as you can’t see Tom Petty singing “fuck these fuckin’ fascists/fuck their family and friends/if they defend a fuckin’ fascist/they can fuck off ’til they’re dead” it comes from the same place.

“IDGAF” (self evidently) is their anthem, “Coronavirus” reaches back into the bowels of punk to make its points at breakneck speed, “GCDC” takes on class war, and spits out its points, “Froot Of The Loom” deals – as this frequently does – with LGBTQ issues, but “Live Laugh Live” is a real departure, almost like a nursery rhyme, but yet, its positivity is not really at odds with the record, in as much as the whole of the album is basically calling for a better world, and its self-empowerment is exactly what is needed after all.

Back in the last century, the great Woody Guthrie used to march around with a guitar that had the legend: “This Machine Kills Fascists” written on. He died almost 54 years and there’s – arguably – even more right wing scum in this world than back then. The likes of Farage, Trump and that tubby bag of filth that is in Number Ten, Downing Street have emboldened these people.

Consider this the fightback. You probably won’t like this record. It’s cool. You’re not meant to and therein lies its brilliance.