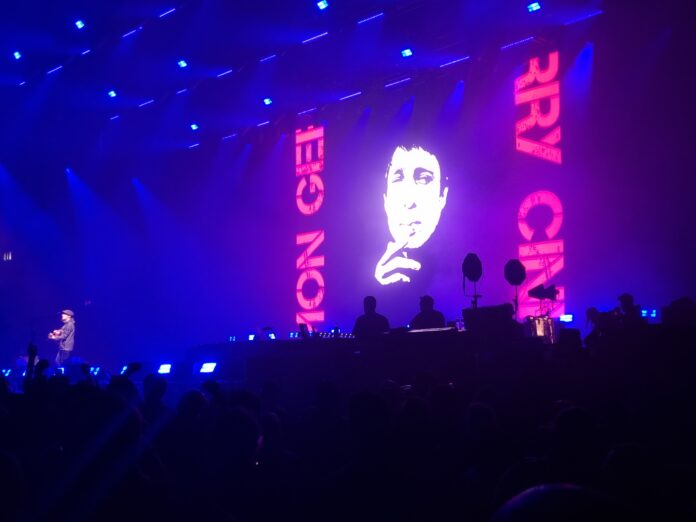 Gerry Cinnamon finishes tonight with “Canter” which was the lead single on his most recent record, “The Bonny”. After he’s finished it plays again through the PA. As I walk through the arena to get back out to the car park – and even outside – thousands of Brummies are singing it.

“Have a sing-song on your way home, take care, love each other” Cinnamon had said, just before. This must be what he meant.

What follows is the story of how the man born as Gerry Crosbie is about to take over the world.

Crosbie is – if Wikipedia is right – exactly nine years younger than your correspondent, and if you go into the arena trying to work out why the bloke who appeared at an open mic and only really began to take things seriously in 2014 suddenly can sell out arenas, write gold records and tour the world, then you’re in no doubt an hour and twenty minutes later.

And, honestly, there’s no trick to it. There’s only one way to get to this level and its never changed: you write the right songs. Ones that connect, massively.

When he starts tonight, with “Lullaby”, its obvious. You look around and the audience is the kids, the mum and dad, the lads on a night out, the bloke in a Ricky Warwick t-shirt (one of them is me). But it doesn’t matter. He’s their favourite, this is their night, but its yours too. He’s crossed over is the point. He belongs to everyone and no one all at once.

He’s got a message too. When he plays “Dark Days”, he explains: “the world is a horrible place, right now and people will tell you that it’s this and that. Fuck them, man! These are the best days of your lives!” And when you think about that it’s the point of the night. This is a celebration. Not so much that this is the second time it’s been rescheduled, but a celebration of life itself.

The practicalities of this are simple: this is one bloke, a guitar and a harmonica – plus some effect pedals – but this is not Dylan in the Greenwich Village. This is an arena rock show. The flames in “The Bonny”, the glitter cannons, the streamers in “Mayhem”, this is not a folky. This is a bloke that writes songs somewhere between Bragg and Turner but on his own terms. Honesty, in the Glaswegian accent, and from his own perspective. “Diamonds In The Mud” (“I wrote this about my hometown and when people sing it about theirs it’s a beautiful thing”) is sensational, and “Discoland” is a party before the encore.

And that encore: One of them is “Belter” and that’s the reason I am here, away from my comfort zone of rock gigs. I’d heard it at a sporting event and Googled it to see what it was. Here, its brilliant. To be truthful, you just get swept away with it, the whole thing. And that’s before “Canter”.

In all honesty, I should have been at another gig tonight. The type of gig I am usually at. The sort of thing where the band are playing the same place they were five years ago and you’re meant to say how “they are on the verge”. They aren’t.  Meanwhile, in some parallel world, Gerry Cinnamon is doing this.

Earlier this week, he was announced as the headliner of a big festival. I’d put the story on the website, and emailed the PR back and said I was going to this tonight and he replied asking if I knew who was his PR firm as he didn’t seem to have one.

That’s why he matters. He proves you can be what you want to be, you can do what you want to do, and you don’t need to fit in. “Look after each other, and you’ll have the best weekend of your lives, easy, peasy,” he’d said. Listen to the man who’s living the dream.