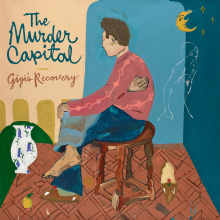 The Murder Capital’s first album ‘When I Have Fears’ had all its songs written and recorded within the first nine months of the band knowing each other. ‘Gigi’s Recovery’ took a lot longer and is released this month.

‘Existence’ gently leads us into the album and it`s a short spoken / sung oration over an offbeat soundscape. As it fades out it blends into ‘Crying’ which sounds like an awakening of sorts with vocals that seem to rise as the number comes to life. There are steady pounding drums and skewed guitar chord riffs that express the feeling of arousal from a deep slumber.

‘Return My Head` bursts into life and races along with a delightful intensity and energy that seems to come from a realisation of something or somebody. A sense of regaining that zest for life or breaking through that barrier of despair. It’s a song of two halves is how the band described `Ethel` which begins with jangling guitar chords and a distant questioning vocal that builds as the track evolves with the drums becoming more voluble. As this journey progresses the vocals demonstrate a sense of frustration or exasperation before the track builds to a crescendo and fades out with the sound of distant laughing expressing nervousness or ridicule.

`The Stars Will Leave Their Stage` has a fairly enticing uneasy or edgy texture that gives the impression that it could erupt or explode at any time soon but instead holds itself in check. The number seemed to express a sense of isolation with some entrancingly jittery guitar tones stretched underneath the vocal. The perception of unease continues on `Belonging` a captivating mediative and introspective musing of connection that to me almost felt the opposite.

`The Lie Becomes The Self` builds slowly with an almost late night jazzy vibe at the beginning and at times throughout. It ebbs and flows musically and almost physically with a sense of separation or segregation then connection, which I found beguilingly confusing. The drum cadence or roll that ends the number, to me was exquisite. We have a kind of mellow drum and bass beat that not only opens up `A Thousand Lives’ but runs throughout this declaration of undying love. There`s a brief reflective passage midway  which is filled slightly with some contemplative spoken oration before the number floats along on a fascinating instrumental soundscape.

`We Had To Disappear` is a little different and becomes reasonably hypnotic as the languid almost detached vocals float over a somewhat shimmering atmospheric musical foreground. In the latter part there is a stripped back segment which allows the vocals to step forward before the music resumes it`s discordant path. We have a love song with `Only Good Things’ which is a rather simple offering but so effective, sort of less is more. I loved the descriptive images of affection brought out in the lyrics such as “Jewels in your eyes like Vega at night”, comparing a beloved`s eyes with a bright star visible in the summer sky almost hinted at Yeats.

Title track `Gigi`s Recovery` begins with an interference similar to a siren and a ticking clock with vocals that are quite deeply textured. It was a composition that I had to listen to a number of times and maybe still didn`t quite appreciate it`s beauty. It`s at time gentle, comforting, them almost despondent and despairing. A contrasting listen of opposites dark, light but nevertheless utterly compelling. Was it an eulogy, maybe. The album concludes with `Exist’  which is another short spoken / sung oration and bookends the album and is maybe the ying to the opening song`s yang.

I read that `Gigi`s Recovery` was written solidly over a two year period and is a concept album. This is as maybe but it didn`t strike me as such. A difficult second album, not here. Their debut `When I Have Fears` came out of the suicide of their close friend and was i`m sure quite cathartic. This time to me they are trying to define who they are as a band. I felt it was wonderfully mature and they managed to use the vocals as if they were another instrument. It felt like a band that were at ease in their own skin as if they had nothing to prove to anyone but to themselves. It would have been more  straightforward to re-formulate the success they enjoyed previously but chose not to. This is vastly different with strings, keys, ambient and unusual sound bites and to me felt similar to what I would assume would be a religious experience. I know I will return to this release repeatedly and discover something new each time.

I made a bold statement the other day having listened to an album that blew me away where I said that it`ll be hard to find an album I’ll enjoy more this year. But with `Gigi`s Recovery` I have.